On the cutting edge
Business

On the cutting edge

A star among surgeons in Korea’s booming beauty business, Dr Joo Kwon is aiming even higher these days.

He’s not a K-Pop idol who sets hearts dancing across the world, but Dr Joo Kwon is a star in another industry that has put South Korea on the global map. As one of the country’s most recognised cosmetic surgeons, he helps to define what Korean beauty is, as well as create the “perfect” faces that many other Asians desire. 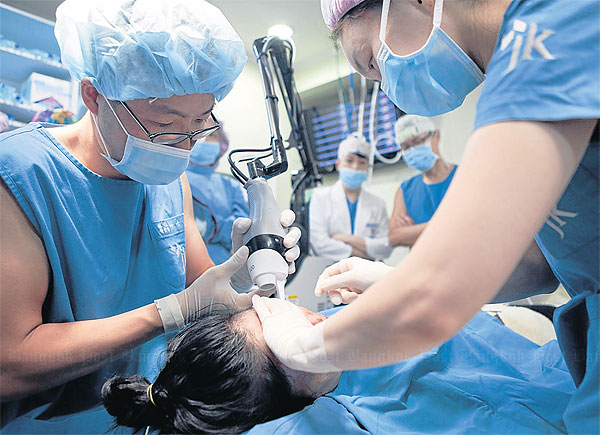 It was only four years ago that the Ministry of Health and Welfare first granted South Korean clinics official permission to receive foreign patients. By meeting the rigorous standards set by the government for medical globalisation, Dr Joo’s JK Plastic Surgery Center was the very first to obtain its licence.

“Our authorisation code is 0001. Ever since then, Korea has opened its doors to the global healthcare market, particularly in cosmetic surgery. We were the first clinic to receive foreign patients,” the soft-spoken surgeon tells Asia Focus at his offices in Apgujeong, part of the Gangnam district in Seoul that is home to around 300 plastic surgery clinics.

Born and raised in Seoul, Dr Joo says that when he was young, his family wanted him to become a soldier, a lawyer or even a diplomat. He had always wanted to become a psychiatrist, but financial and other considerations led him to pursue plastic surgery as his specialty.

“Since I joined the cosmetic surgery industry, my perception has shifted,” he says. “I found out that the idea of changing people’s image or appearance has a lot to do with psychology.

“I realise that psychiatrists and plastic surgeons share a lot in common, and I’m glad I have chosen this field as my profession.” 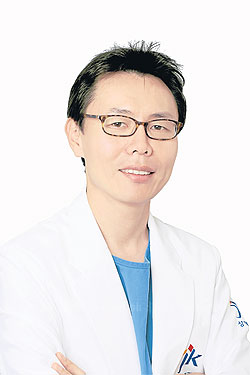 Established in 1998, JK Plastic Surgery today offers various services including a spa, aesthetics, medical cosmetics, a cafe, hotel, and even a stem-cell laboratory. Throughout the first 15 years of operation, Dr Joo says he has enjoyed all the challenges along the path.

“In this business, particularly in the beginning, sometimes we don’t have enough patients to offset the expenses of the huge investment we have to make in high-technology equipment,” he says.

“However, innovation and new, improved methods are essential in this industry. If we can’t avoid trouble, we just have to enjoy fighting against it.”

Dr Joo, now 47, says he continues to draw inspiration from seeing the smiling faces of his patients when they express their satisfaction with their surgery results. “The model of this clinic is to help people with our skills and technique. I’m pleased to see my patients gain more confidence once they see the outcome after an operation.”

Some have attempted to link the popularity of plastic surgery in Korea with the Korean Wave of pop culture, with many Asians wanting to look like Korean actresses and actors. In this case, Dr Joo agrees that the prevailing concept of beauty is very much dictated by the looks of these celebrities. At times, there are patients who come to his clinic armed with pictures of their idols.

With the popularity of K-Pop culture and Korean dramas all over East and Southeast Asia and even parts of the Middle East, foreign patients now account for 40-50% of the business at the JK clinic. And of this figure, Chinese patients make up about 70%. The clinic has about 20 multinational staff who can speak a variety of foreign languages in order to serve international patients and provide a home-like atmosphere.

It’s worth noting as well that plastic surgery is no longer just a female pursuit; males make up about 20% of JK Plastic Surgery Clinic’s patients.

The cosmetic surgery industry these days is one of South Korea’s biggest success stories after K-Pop. Its providers offer a winning combination of affordable prices together with high-quality equipment, hotel-like amenities and multilingual around-the-clock assistance.

In a world where almost everyone would like to look younger, and where millions more can now afford to do something about their looks, demand for facial makeovers and anti-ageing treatments is on the uptick. But what really matters most is doctors’ understanding of the differences in what patients from various countries want.

According to a public relations representative from JK Plastic Surgery, the Chinese are usually less afraid of a complete overhaul when it comes to facial makeovers. The Japanese tend to be more conservative and prefer to keep their unique features, while Koreans think that beauty is an attainable object, almost a commodity.

Wider societal acceptance, peer pressure, competitive work environments and widespread advertising are among the obvious trends seen the industry. But Dr Joo says it is part of his responsibility and that of his medical peers to ensure that patients will not go too far.

“Although I am a plastic surgeon, I don’t recommend that people do a lot of procedures,” he stresses. “There are many who have become addicted and undergone more than 10 surgeries. I don’t want my patients to be like that.”

In fact, he does not recommend his patients commit to any surgical procedures unless the results are guaranteed to be beneficial for them.

Another trend that he believes could soon revolutionise the medical profession, including plastic surgery, is robotic surgery. The day is coming when doctor and patient may not need to be in the same room — or even in the same country. Technology is advancing to the point where a surgeon will be able to perform highly precise procedures using a computer that remotely controls small instruments attached to a robot. 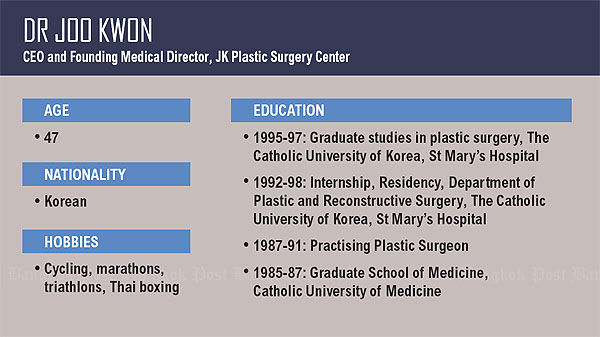 “In global healthcare, it is either the doctor or the patient that needs to travel so that the two can meet each other and undergo the surgical procedure together,” he explains. “But with robotic surgery, you no longer need to travel. You can just sit at the office computer station to direct the movements of a robot and perform the surgery remotely. This will surely create a huge influence on plastic surgery.”

Whether surgery is carried out by humans or robots, one thing that won’t change is the paramount importance of patients’ safety and satisfaction. Dr Joo says proudly that his clinic has not had a single medical accident and lives up to its motto: “Safety is non-negotiable”.

The clinic has also won an award from Minister of Health and Welfare as “the best hospital to attract foreigners”, setting records for the number of foreign patients in 2010 and 2011. But even though JK Plastic Surgery has become one of the country’s largest aesthetic clinics, Dr Joo says his ultimate goal is still higher.

“My initial goal was to create the best plastic surgery centre in the world, but since then my desire has expanded further. Now, I want to create the world’s best wellness centre.”

The concept of a wellness centre, in his view, combines inner health and external beauty.

“We are planning to expand our business further by creating a wellness resort in Southeast Asia, in response to the growing number of rich patients in the region. We will also set up another one on Jeju Island, aiming to attract the Chinese and Middle East markets.”

Dr Joo sees Southeast Asia as a great opportunity because of its location and the diversity of its people. “Asean is a region of multicultural nations where either tourists or patients will find it very comfortable being in these countries. This makes it a destination where we should aspire to be.”

When he’s not operating or tending to clinic business, Dr Joo is a fairly serious athlete. He enjoys the competition of triathlons and says he would like to participate in the Phuket Triathlon if opportunity allows in the future.

Martial arts are another favourite. Even as a teenager growing up in the country that gave the world Tae Kwon Do, he chose a Thai boxing class.

“I really like Muay Thai; it’s considered quite a popular sport in Korea,” he says. “I even still have the sandbag in the basement of this clinic.”