A former trader with a gift for communication, Rajeev Peshawaria has made a career out of bringing out the best in others.

Giving a motivational speech to a room packed with top executives of some of Thailand’s largest companies is no easy task, but most people attending a recent 90-minute talk by Rajeev Peshawaria came out with expressions of amazement. 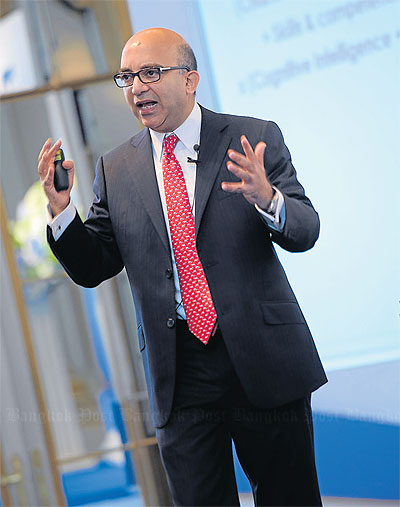 “One thing that will not allow Asian countries to realise their full potential is the power distance. It is a huge problem. … Asia has to get over its hierarchical culture if it wants to realise its true potential”

Such is the power of persuasion and motivation that the Indian-born CEO of the ICLIF Leadership & Governance Center had over his audience at “Top Talk” session held by the Thai Management Association in Bangkok.

ICLIF, or the International Center for Leadership in Finance, is a non-profit organisation, under the auspices of Bank Negara Malaysia (the central bank), established to develop leadership and corporate governance programmes for the financial industry and corporations in the region.

But learning to keep so many people seated for hours and participating is not something that Mr Peshawaria was trained for or even wanted to do when he was younger. He was drawn to the “glamorous” job of trading and making money for American Express in India, until one day his human resources manager came up to him and said, “You are missing the calling of your life.”

Mr Peshawaria at the time was giving occasional speeches, and the HR head saw how the young trader enjoyed the experience and had a gift for attracting the attention of those attending the lessons.

“This guy came up to me and told me that I was missing the calling of my life, and I initially ridiculed him as being out of his mind thinking that I would join HR field,” Mr Peshawaria recalled during a recent visit to Thailand.

But nearly two decades later he is doing exactly what he told his HR chief, Raghu Krishnamurthy, that he would never do.

And Mr Krishnamurthy? “Today this man is the Chief Learning Officer of GE worldwide. GE is the picture postcard for human development and I can’t think of any other person for that job other than him,” said Mr Peshawaria.

Mr Krishnamurthy is also one of the few people that Mr Peshawaria considers to be a true leader in his life, having changed jobs from American Express to Goldman Sachs, Coca-Cola and then Morgan Stanley before joining ICLIF.

The issue of leadership, of how many bosses have been true leaders, was the first question that he asked the hundreds of guests assembled at the Mandarin Oriental Hotel in Bangkok for his talk. The response was muted with only a few hands going up for one or two bosses.

“[Mr Krishnamurthy] saw something in me that I did not see in myself. And I think over time as he made me think about it, that he was absolutely correct,” he said. “To be a leader is to help subordinates to find a purpose and values”.

But the move to the HR world in the early 1990s was not something that was easy for a person who was making a decent living in the financial world, especially during the boom era.

After many talks with his HR head, Mr Peshawaria eventually agreed to move from his money-making trading job to what he calls a “people business”.

Not only did he take a cut in salary, but he was moving to a field perceived as one that people only joined if they had no other options. He admits that during those days joining HR was considered not just crazy but also “suicidal”.

“But today, nearly two decades later, I can tell you that it was the best decision I ever made and even those friends and family now agree.”

So how did a trader decide to take up a job he never thought he would do?

To answer this question, Mr Peshawaria simply asked himself what he was passionate about and where he could offer the biggest contribution.

“Does that mean my life is over and I cannot make any contribution? And even here the answer was ‘No’ as well.”

Then the question was what did he do better than what he did not do well — basically comparing himself with himself.

“And the answer was that I had a gift of communication and a gift of storytelling and simplifying complex ideas into hunks and nuggets that an average person can understand,” he said, and that drove him to take up the offer.

That one “yes” took him up the corporate ladder and soon he was heading the Asian HR operations for Amex before being asked to move to New York. From there he moved to Goldman Sachs where he was a pioneer in setting up the investment bank’s talent development department called Pine Street.

Soon he moved to Coca-Cola in Atlanta as Chief Learning Officer, and then to Morgan Stanley. By this time it was the peak of the financial crisis and everyone was facing the stress of having to deal with the management meetings while many of the largest financial companies in the United States were going belly-up or teetering on the verge of collapse, including Morgan Stanley.

During this period he started to think about setting up his own business and becoming an entrepreneur. While launching his company, he was offered a job at ICLIF

During that phase Mr Peshawaria wrote his book Too Many Bosses, Too Few Leaders, which brought him to fame. But as he admits, “JK Rowling happens to one in a million”, and while he pursued his passion, he needed to do something else.

They said they needed someone to help them expand their scope “so for me that was a dream come true”, as building his own business up to a similar level would have taken him years. ICLIF offered a ready-made platform with visionary leaders who had put their money where their mouths were.

He moved to ICLIF in 2010, a move that was well supported by his family, though many people thought he was crazy to give up a job at Morgan Stanley in New York to join an institution in Malaysia.

But it was a dream come true as he has been able to travel around Asia and the Middle East doing what he does best.

“I say to people that if you are passionate and you stick to your dreams, don’t worry about the finances, they will come. You have to try to be the best you can be and the rest will come,” said Mr Peshawaria, 49.

Today at ICLIF he heads a team of 50 people from both Asia and West in what he calls a mix of both regions to achieve his goal of better governance.

ICLIF’s core business is programmes, research and executive education. Companies hire it to do these things and some programmes offer public participation as well.

It works across the region from Indonesia, China, Hong Kong, India, and recently signed a strategic partnership with the Dubai School of Government.

But working with Asian and Middle Eastern people is not that easy, especially with entrepreneurs whose authoritarian style needs to be modified, says Mr Peshawaria.

“Your question has hit the nail on the head. One thing that will not allow Asian countries to realise their full potential is the power distance. It is a huge problem,” he said when asked how he could teach high-ranking executives in Asia to be leaders and not just authoritarian bosses.

This trait was evident everywhere, he said, listing Japan, Korea, Malaysia, India, China and other countries where he has seen it in action.

“It’s crazy, in some countries there are titles, and I have to say that Asia has to get over its hierarchical culture if it wants to realise its true potential; otherwise we will continue to produce bicycles for the world or do the other low-tech processing that we do around the region.

“If we want to go up the food chain we have to realise Asia’s full potential. Then our biggest enemy is ourselves and that is this hierarchical culture. We have to give freedom to let the flowers blossom.”

He admits that at a lot of the countries in this part of the world, the first thing many young people learn when they join a company is that they had better keep their mouths shut if they want to move up the corporate ladder.

One good thing about the newer generation, though, is that more young people are beginning to assert themselves and in some countries there is a greater openness to speaking up, which he hopes will be seen in other countries in the near future

Asked if he can spot a leader in a crowd or from the various seminars he undertakes, he says that at times one can spot potential, but over the years the spark could die down. It is only in true leaders that the spark endures.

Today half a world away, Mr Peshawaria says that people such as Mr Krishnamurthy spotted no-name people like him and at that time he may not have realised what he was spotting, but “that is the best part because such leaders do these things naturally”.