Japan's immigration police will be stricter in dealing with Thai travellers after it emerged the Japanese government's visa waiver has encouraged some Thais, mostly females, to work there illegally. 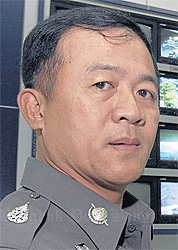 Thai Immigration Bureau chief Panu Kerdlappol said he had been informed of the new firmer approach on Friday.

He said Japanese officials will thoroughly check travellers' return tickets and accommodation details upon their arrival in Japan.

Those who fail to produce the documents may be refused entry and sent back immediately, Pol Lt Gen Panu said.

He said the measure was put into place after Japanese authorities estimated an average of 50 Thai citizens had overstayed their visas each month since the visa waiver was implemented on July 1 this year.

About 200 illegal Thai immigrants have been detected. Most of them are females who are believed to be working in massage parlours, he said. Many Thai workers have been lured into working in Japan by Thai brokers who reportedly charge them 300,000 baht each, Employment Department chief Prawit Khiangphon said. He warned Thais against falling victim to gangsters.

Japanese authorities will fine foreigners guilty of illegal immigration 3 million (about 940,000 baht) and if they are found to have worked without permission, they will be fined a further 2 million.

If the wrongdoers do not have the money to pay the fine, they will be jailed and pay off the fine by working for no wages, Mr Prawit said.

He said his department cannot easily track down and bring illegal Thai workers back home because they often change addresses to evade Japanese police.

Despite these problems, Pol Lt Gen Panu said Japan insists it will not revoke the visa exemption for Thai travellers. A large number of Thais have flocked to spend their holidays in the art and tradition-rich country.

The visa waiver is aimed at "promoting the relationship between Thailand and Japan", the Japanese embassy in Bangkok said on its website.

The waiver is granted to Thais who plan a short visit to Japan for a period of 15 days. However, Japanese authorities can ask them to present their itineraries and return tickets.