BAAC to borrow another B140bn
Business

BAAC to borrow another B140bn

The Bank for Agriculture and Agricultural Cooperatives (BAAC) will borrow 140 billion baht with the Finance Ministry's guarantee to fund the 270-billion-baht budget set for the government's rice-pledging scheme for the current harvest year. 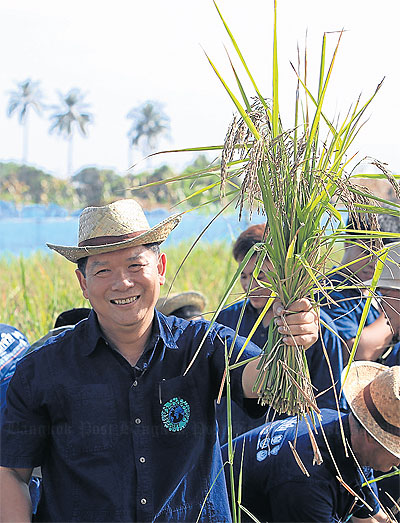 The remaining 130 billion baht will come from rice sales from the state stockpile.

The borrowing is possible because the Finance Ministry still has some room to guarantee the loans, said BAAC president Luck Wajananawat.

By law, the ministry can guarantee loans for the state-owned bank up to six times its capital fund, or around 600 billion baht.

As the pledging prices are 40-50% above market rates, the rice-pledging scheme, a major vote-winning populist policy of the ruling Pheu Thai government, has drawn strong criticism from economists who are concerned about its effects on the fiscal budget.

Despite the criticism, the government has continued the policy by setting aside the 270-billion-baht budget to buy rice for the 2013/14 harvest year after the first budget of 500 billion baht was fully spent over the previous two harvest years.

To ease the pressure, the government slightly modified the criteria of the scheme.

The prices to be paid for the current main crop, running from early this month to Feb 28 next year, are kept at 15,000 baht a tonne for white rice and 20,000 baht for Hom Mali, but the pledging amount has been capped at 350,000 baht per farming household.

For the past two years, the government bought all the grain pledged with it.

For the second crop of this harvest year, the price is reduced to 13,000 baht a tonne with the payment made to each farming household capped at 300,000 baht. The second crop runs from March 1 and Sept 30 next year.

Mr Luck said the government estimated 16.5 million tonnes will be pledged under the scheme in this harvest year.

The government has also capped the debt incurred from running the scheme at 500 billion baht by the end of 2014. This means the Commerce Ministry needs to sell at least 270 billion baht worth of rice from the stockpile to achieve the target, he said.

Over the past two harvest years, the BAAC spent 179 billion baht on top of the 500-billion-baht budget to fund the scheme and all 679 billion baht was transferred to 4.2 million farmers through the BAAC's accounts, he said.

A total of 43.54 million tonnes of rice were pledged to the scheme during the period.

The BAAC has to date been repaid 130 billion baht by the Commerce Ministry, which is in charge of rice sales. The remaining 49 billion baht has yet to be repaid.

Mr Luck said the cabinet has approved to repay the bank another 25 billion baht from the budget and the remaining 24 billion baht is expected to come from the rice sales.

The Commerce Ministry is confident of selling 10 billion baht worth of rice each month between October and December this year to be repaid to the BAAC.

As for the state bank's financial health, it extended 149 billion baht in new loans during the six months to Sept 30 this year, excluding those to the rice-pledging scheme, raising outstanding credit to 1.21 trillion baht.

Its deposits increased by 19.4 billion baht during the period to 1.02 trillion baht.

Its revenue and net profit during the March-to-September period amounted to 34.49 billion baht and 5.1 billion baht, respectively.

Its non-performing loans were 5.63% of outstanding loans at the end of September, while its capital adequacy ratio was 11.13% of risk-weighted assets _ well above the 8.5% minimum requirement of the Bank of Thailand.