All over the map
Business

All over the map

Founder of ‘Adventurous Kate’ travel blog back in Southeast Asia for fresh adventures to share with a growing legion of readers.

Kate McCulley remembers standing on the deck of a sinking ship in Indonesia in 2011, about to jump into the ocean in the middle of the night and swim for her life to shore. 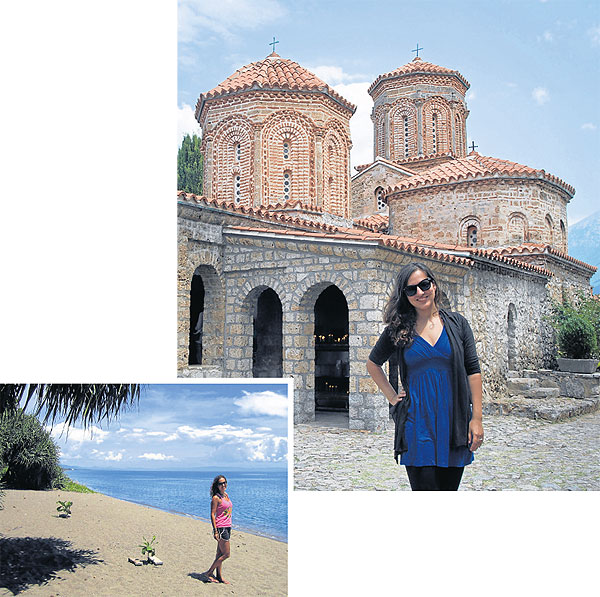 Kate McCulley keeps her readers updated from all over the world, from Lake Ohrid in Macedonia (above) to Sengiggi (left) in Lombok, Indonesia.

Terrified and travelling alone, she had just one surprising thought running through her mind: “You’ve got to be kidding me.”

Now 29 years old, Ms McCulley has become a popular travel blogger whose unshakeable sense of humour, adventurous nature and honest account of solo female travel have made her a solo travel guru.

Three years after the Southeast Asia trip that put her “Adventurous Kate” blog on the map, she is back for another round of travel throughout the region — this time, she hopes, without a shipwreck (which she survived unharmed).

“It’s like coming home,” she says while sitting on a patio near Bangkok’s Khao San Road on a Friday afternoon in October. “Bangkok in particular was the place where I spent the most time. I’m so happy to be back.”

She looks at home too. Leaning back in a chair, with her long brown hair hanging wavy and loose around her shoulders and sporting a plum-coloured dress (purchased after losing her belongings in the shipwreck), Ms McCulley appears relaxed, composed and comfortable in her settings; even more so when compared to nearby tourists, either staring tiredly off into the distance or enthusiastically drinking beers.

Ms McCulley, who is originally from the Boston, Massachusetts area in the United States, has a fondness for Southeast Asia. Her first trip here coincided with her blog’s takeoff in readership and it’s also where she advises new and solo travellers to first set out.

“Southeast Asia is a great place to start,” she says. “It’s so easy to travel here. Every guesthouse doubles as a travel agency. There is a well-worn backpacking trail in the region. The food is great, the people are wonderful, the weather is nice and hot.”

Ms McCulley, who has travelled to 45 different countries, also says Southeast Asia is a “very safe” place for solo female backpackers “as long as you have common sense”.

Some of this common sense includes ensuring someone always knows where you are when travelling, and locking up valuables when staying in hostels, she says.

“Also, here’s a big one that doesn’t get said enough — don’t get too drunk,” she says. “Getting drunk can lead to a lot of bad stuff. A lot of my friends who have been robbed or drugged have been so because they were drunk. And when you’re solo you have to be extra, extra, extra cautious.”

She adds that two of her friends who were drugged were men.

Ms McCulley also advises travellers, particularly women, to research the cultural norms and acceptable dress code pre-arrival. For certain countries female travellers may have to exercise a higher level of caution and follow a longer list of “things not to do”, she says.

She makes this point specifically when referring to India, where a string of high-profile sexual assaults against women, including tourists, took place over the past year. She has yet to visit India but says she hopes to make the trip in order to give informed tips about travel to the country from a female perspective.

Ms McCulley has her own share of cautionary tales, which she shares in a post called “Things I did WRONG in Southeast Asia” on her blog. She writes about spending too much money on the Andaman Coast, letting herself get spray-painted in Vang Vieng, and fighting Muay Thai in Koh Phi Phi with an Australian girl “who was probably descended from convicts”.

“I was reckless back then, in a lot of ways,” she says now.

But regardless of her own experiences with things that went wrong, she’s adamantly against fear-mongering, particularly when it comes from inexperienced travellers.

“Don’t listen to horror stories from people who have never done what you’re about to do,” she says matter-of-factly.

This message is part of an underlying theme within her blog.

“There is a lot of bullshit out there designed to scare women away from travelling on their own; I’m here to clear up those myths,” she writes in her blog. “I believe that it’s best to teach by example, and my ultimate goal is to show women that independent and solo travel can be safe, easy, and a lot of fun.”

Ms McCulley certainly fits the mould of an independent travel role model. In 2010 at age 26, after saving up US$13,000, she quit her marketing job and set off for six months of travel in Southeast Asia.

It wasn’t her initial intention to become a full-time travel blogger. She was more interested in travel when she initially set out.

But after returning to the United States in 2011, having earned a dedicated following and received an increase in advertising revenue, she began to consider travel blogging as a possible career.

“I was like, holy crap, what if I just ramped up the advertising? I wouldn’t have to go back to work,” she says. It has now been more than three years since Ms McCulley worked a “real job”, she says.

This is an accomplishment she celebrates annually on Sept 14, her “I-quit-my-jobaversary”, as she calls it. This date, marking her departure from conventional work and the beginning of self-employment, is more important to her than the day she set out to travel, she says.

“To me as much as I’ve loved the travel, the self-employment is what I love, I need, I have to keep up,” she says.

Her blog now sees more than 75,000 unique visitors per month and more than 220,000 page views per month. She also has 17,000 Twitter followers and thousands of Facebook likes. But it’s difficult to earn a steady income as a travel blogger, she says. Ms McCulley does work both on and off her blog to stay profitable.

On the blog, she receives advertising revenue by writing branded content posts about certain products, generating social media coverage and posting banner and video ads. She also makes money off sponsored travel, which means companies or tourism boards pay her to visit and write about destinations, and affiliate marketing, which means she gets a cut of the profits when someone buys a product after clicking a link on her site.

Off the blog, she does freelance writing, consulting in the areas of social media, blogging and travel, and public speaking at travel and blogging conferences.

She makes no secret of how difficult it is to maintain these various responsibilities, all while travelling.

“The work never ends, there’s always something,” she says.

Her monthly income is between $2,000 and $6,000. This is enough for her to live in a place such as London, England, her current home base and where her fiancé lives, she says.

Throughout her next five months of travel, she plans to visit Cambodia, northern Thailand, the Philippines, Myanmar and Hong Kong. This time though, her blog might show her experience of Southeast Asia from a different perspective; she’s travelling primarily with her fiancé.

“I’m not drinking and partying anywhere on the level that I was back then. I was a young single, fun-searching backpacker,” she says, admitting she now spends her spare time researching gyms in London rather than places to travel to next.

But despite this shift toward settling down, she says she’s still committed to expanding her blog, staying self-employed, travelling, and sharing her highs and lows with her readers.

Her goal has always been to have one of the biggest travel blogs in the world, and her accomplishments so far speak volumes about her determination to achieve what she sets out to do.

“I own one of the biggest, female-owned independent travel blogs out there,” she says. “I could not be happier. This is everything that I wanted.”