Thailand’s stocks fell the most in a month, with the benchmark index posting the biggest drop worldwide, amid speculation that a bill granting amnesty for political offenses will spur protests against the government. 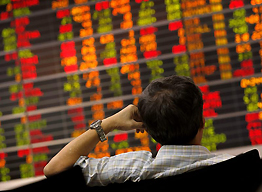 Stocks in Thailand drop the most in a month, amid speculation that a bill granting amnesty for political offenses will spur protests against the government. (EPA Photo)

A parliamentary committee voted last week to add a clause to the ruling Pheu Thai party’s bill that would annul legal cases stemming from the country’s 2006 coup, including the conviction of former prime minister Thaksin Shinawatra, the Nation reported Oct 18. Thailand’s government, now led by Thaksin’s sister Yingluck Shinawatra, the same day extended the use of the Internal Security Act for some parts of Bangkok through Nov. 30 to control protests.

“Investors are concerned the ruling coalition’s attempt to pass a revised amnesty bill will revive tension,” Kasamapon Hamnilrat, the head of research at Krungsri Securities Co in Bangkok, said by phone. “Without this concern, Thai stocks should gain as most overseas factors are positive.”

The opposition Democrat Party will oppose the bill in parliament and support public demonstrations to prevent the measure, Abhisit Vejjajiva, former prime minister and the party’s leader, said on the party’s website on Monday.

Demonstrations by supporters and opponents of Thaksin -- who was removed from power by the coup -- have led to an airport seizure, business center blockages and arson attacks in Bangkok during the past seven years. Thailand has had nine military coups and more than 20 prime ministers since 1946.