Goal is to discourage price speculation

The Finance Ministry has pitched the idea of adjusting the tax on unused land to more than 0.5%, up from not more than 0.5% in the current draft, to discourage land speculation. 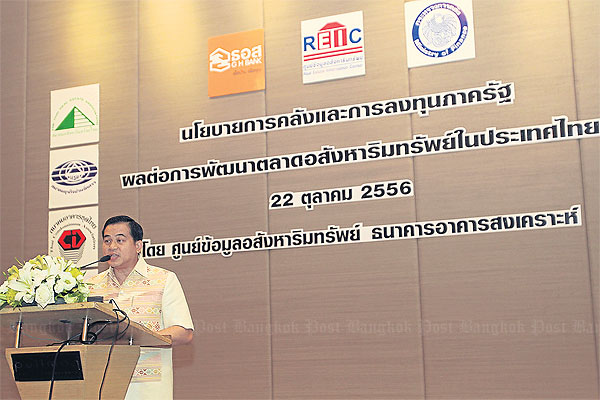 Somchai Sujjapongse, director-general of the Fiscal Policy Office (FPO), said it is an initiative by Deputy Prime Minister and Finance Minister Kittiratt Na-Ranong, who intends to tax unused land only.

"We have been assigned to conduct a feasibility study on whether this tax is possible and if we need a new law to apply it," he said.

A tax on unused land has been floating around in Thai politics for two decades and was part of a Democrat Party land and building tax bill offered during the last administration.

Under the draft, the tax rate for undeveloped land will not exceed 0.5% of the appraised value for the first three years after passage of the law but can double later, although never exceeding 2% of its value.

The new proposal is for unused land to be taxed at more than 0.5%, but the final rate is undecided.

"In a bid to make sure the tax rate is efficient, we believe the current rate is not high enough to discourage speculators," said Mr Somchai.

Mr Kittiratt did not consider other land tax categories in the draft such as land and buildings for commercial use (proposed at up to 0.5% of the appraised value), land for agricultural purposes (0.05%) and private residences (0.5%).

Mr Somchai said initially the definition of unused or undeveloped land will be land where less than half the plot is used.

The FPO will discuss an appropriate rate with property developers, academics and local administrations before deciding on a tax for unused land.

Mr Somchai said the ministry has no plans to raise the value-added tax rate any time soon while the economy teeters, but once it recovers the FPO may reconsider a VAT hike from 7%.

He said in the future, the country's tax revenue will shift from personal income tax and corporate tax to consumption taxes such as VAT, excise tax and property assets as Thailand's demographics change.

Thailand is ageing and will see less of its population of working age, making them unlikely to pay income tax, while social expenses to care for the welfare will hike.

Mr Somchai said fiscal budget discipline will not be affected by the rice pledging scheme but will be hurt by an ageing society if the country fails to adjust its tax structure.