But analysts remain confident of situation

Outstanding non-performing loans (NPLs) for 11 SET-listed commercial lenders rose by 6% between the end of last year and Sept 30, a sign that borrowers' debt-servicing ability is deteriorating amid the lacklustre economy. 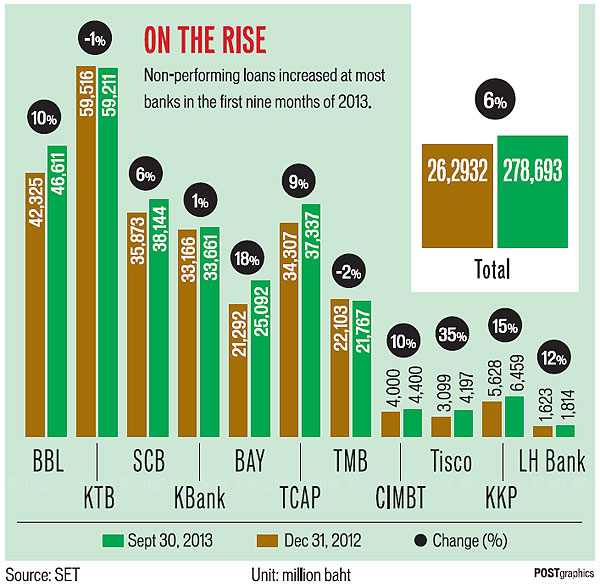 However, analysts played down the increase, saying the lenders have a high provision coverage ratio _ a measure of money set aside by lenders for potential bad debt losses. Lenders' NPL ratio remains relatively low, and the country's economy is expected to rebound next year.

The outstanding NPLs for the 11 banks amounted to 279 billion baht at the end of September compared with 263 billion at the end of 2012, according to statements filed with the Stock Exchange of Thailand.

Nine of the 11 banks saw their NPLs increase over that period.

Tisco Financial Group experienced the largest increase in NPLs, up to 4.2 billion baht from 3.1 billion, followed by Bank of Ayudhya (BAY), rising to 25.1 billion from 21.3 billion, and Kiatnakin Bank (KKP), increasing to 6.46 billion from 5.63 billion.

Among the country's four largest lenders, the NPLs of Bangkok Bank (BBL) jumped to 46.6 billion baht at the end of last month from 42.3 billion at the end of 2012.

Senior executive vice-president Suvarn Thansathit recently said BBL's bad loans will keep rising slowly until the end of this year, but the ratio will be maintained, not exceeding 2.5% of total loans.

Krirk Vanikkul, the Bank of Thailand's deputy governor for financial institution stability, said higher commercial bank NPLs are not a major concern at the moment as the ratio is still low.

The filing reported five of the 11 lenders saw their NPL ratio increase from the end of last year: BBL, BAY, Thanachart Capital, KKP and Tisco.

Woraphon Wiroonsri, assistant vice-president of Maybank Kim Eng Securities, said commercial lenders with a focus on auto loans have seen their bad credit rise at a rapid pace, as the used-car market has been distorted from the sharp slump in prices prompted by the government's tax rebate scheme for first-time car buyers.

However, the market is returning to normal after the tax scheme lapsed at the end of last year, he said.

Mr Woraphon said rising NPLs are not a worry, as the banks have prudently set aside higher provisions as a counter-cyclical buffer against future uncertainties, raising the coverage ratio of each bank to more than 70% of NPLs.

"Our economy has only slowed, not fallen into a crisis, and will return to normal growth next year," he said.

Mr Woraphon said outstanding NPLs will continue to rise until year-end, but the NPL ratio is expected to remain stable during the fourth quarter.

The banking sector index edged up 0.18% on Tuesday to 536.11 points in trade worth 7.01 billion baht. The Thai market was closed yesterday for Chulalongkorn Day.