Domestic consumption will remain a concern

Bad loans, shouldered by state-owned specialised financial institutions (SFIs) in particular, are the key risk for the Thai economy in 2014, says Raymond Maguire, the head of research and strategy at UBS Thailand. 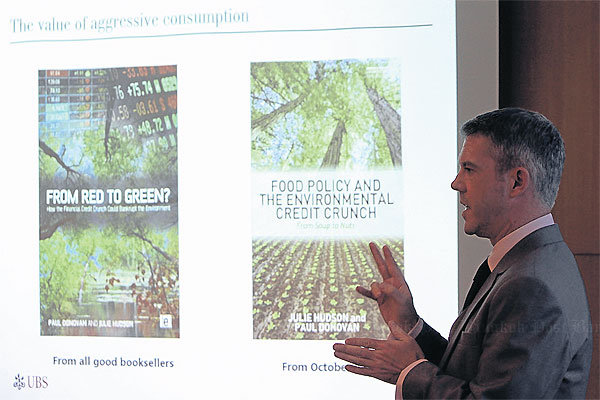 "Two SFIs have already needed capital bailouts, but the good news is they are small and can be managed. That means this will not translate into a systemic risk or a banking crisis," he said, noting there is a tail risk to the bailout for the economy.

Mr Maguire is concerned about small and medium-sized enterprises and SFIs, as cooperative banks have lax lending standards and do not share their data with the National Credit Bureau.

"The banks that have been lending aggressively to low-end consumers are government banks or SFIs, and over the last three or four years they were lending to the poor at 25% a year but recently pulled back to 7%," he said.

Mr Maguire said the government's controversial rice pledging scheme will slow growth for rural communities that have been benefiting from the policy.

Tighter rural credit lending and the price pullback of the government's rice pledging scheme will contribute to lower spending power for rural communities and low-end consumers, he said.

Domestic consumption remains a concern, as most of the accumulated debt is associated with low-end consumers.

UBS predicts economic growth will reach 2.8% this year and 5.1% next year as exports and the global economy improve.