Electrolux to move factory to Thailand

STOCKHOLM - Electrolux AB (ELUXB), the world's second-biggest home appliances maker, said it will eliminate 2,000 jobs after reporting third-quarter earnings below analysts' estimates, and plans to close a factory in Australia and move production to Thailand.

Its stock slumped the most in eight months.The maker of AEG vacuum cleaners said in a statement on Friday that it is also reviewing the competitiveness of its four Italian manufacturing plants. Added to other measures, Stockholm-based Electrolux expects annual savings of about 1.8 billion kronor (US$284 million). 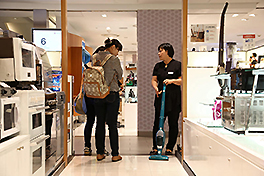 "We expect these actions to have a positive impact on our cost position and contribute to our margins," Chief Executive Officer Keith McLoughlin said in a separate release. Electrolux expects to take 3.4 billion kronor in charges related to the measures in the fourth quarter and 2014.

The Swedish company is expanding in emerging markets and moving production to low-cost countries to counteract weakness in Europe. Electrolux said the measures announced on Friday are “the next phase” of a manufacturing footprint program initiated in 2011 to improve cost competitiveness.

The shares fell as much as 6.3%, the biggest decline since Feb 1 and were down 6% to 162.4 kronor at 9.50am in the Swedish capital. The stock has lost 5% this year, giving the company a market value of 50 billion kronor.

"This is no huge surprise," Johan Eliason, an analyst at Kepler Cheuvreux in Stockholm, said by telephone about the cost cuts, adding results were marginally weak due to Europe and currency effects.

Electrolux anticipates demand in Europe will decline by as much as 2% in 2013, it said today.

In North America, business is benefiting from a recovering housing market. Electrolux said it predicts that demand for appliances in the United States will grow by as much as 9% this year, up from a previous forecast of as much as 7%.

Whirlpool Inc. this week raised its full-year earnings forecast as the maker of KitchenAid appliances reported a better-than-anticipated third quarter. In the US, the Benton Harbor, Michigan-based company estimates industry shipments will increase by as much as 9% this year.

Electrolux said the cost cuts and job reductions announced on Friday will mainly affect its appliances businesses in Europe, the Middle East and Africa. The company had about 60,000 employees at the end of June, according to its website.

Electrolux earnings before interest and taxes for the three months ended Sept 30 fell 24% to 1.08 billion kronor from a year earlier. The average of 15 estimates gathered by Bloomberg was 1.32 billion kronor.

Third-quarter sales were little changed at 27.3 billion kronor while analysts had estimated 27.6 billion kronor. So-called Organic sales growth was 4.9% while currencies had a negative impact of 4.6%, the company said.

Green tech set to be leading trend in 2021

Base year adjusted for calculation of CPI