Huge rallies may not topple the government, but the fact that they are happening at all is a small miracle.

As Cambodia marked the 22nd anniversary of the 1991 Paris Peace Agreements that laid the groundwork for UN-sponsored elections to end the brutal Khmer Rouge regime, tens of thousands of protesters were on the streets of the capital to seek UN help again.

This time they want the world body to back their demand for a fresh look at the hotly disputed results of the July 28 election this year. The fact that they were on the streets at all says a lot about how far Cambodia has come in two decades.

People from all walks of life joined rallies over three days last week and added their names to a petition that the Cambodia National Rescue Party (CNRP) hopes will gain support from as many as 3 million people to have the UN look into the outcome of the election that both the government and opposition parties claim to have won.

CNRP leader Sam Rainsy has been unrelenting in his push for an investigation into polling irregularities, seeking support from various elements of the international community.

As Freedom Park in Phnom Penh filled with supporters, opposition leaders over the three days delivered petitions signed with the thumbprints of more than 2 million aggrieved citizens to the United Nations and embassies of other countries that signed the original Paris agreements in 1991, including France, Britain and the United States. 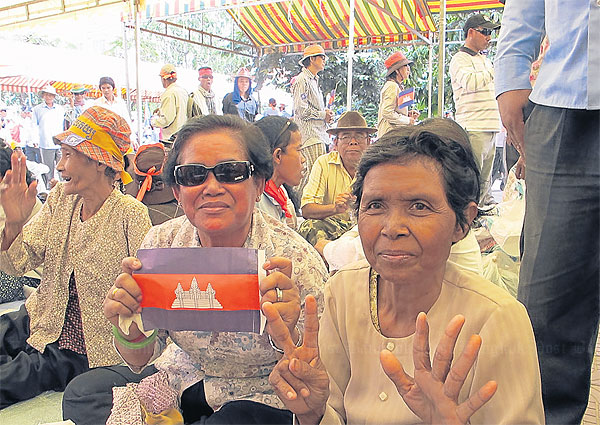 A woman who had travelled 150 kilometres to Phnom Penh holds up 7 fingers, symbolising the CNRP's number on the July 28 ballot.

Sam Rainsy over the past few weeks laid the groundwork for the rally by going around the world and asking various global powerhouses to support his cause and to suspend business dealings with the incumbent regime of Prime Minister Hun Sen and his Cambodian People’s Party (CPP).

Many observers agreed that the fact that the opposition was able to hold a peaceful demonstration without any incident was already an important victory for freedom of assembly, as well as a direct message to strongman Hun Sen that the people of Cambodia have awakened and want to see some positive changes.

At Freedom Park, elderly Cambodian farmers from rural areas were well represented among those who had made the trip into the capital. All of them had takes of past grievances, blamed on the ruling party.

Asia Focus spoke to one group of farmers who said that more than 100 of them had travelled more than 150 kilometres to exercise their right to be heard, hoping the strength of massed people’s voices would bring real change.

“All of us here want to change the leader,” said Mrs Hen Souern, a 64 year-old farmer. “Our living standard is getting lower everyday and we don’t have any money to receive healthcare services.

“We hope that the new leader will help us improve the education system and take better care of the old people.”

Hundreds of bystanders lined the 2.5-kilometre route, leading to heavy traffic congestion on one of Phnom Penh’s major boulevards. Protesters came in all kind of transport, from flatbed trucks to motorcycle taxis, and their numbers included monks and nuns.

“Even though we are monks, we want to express our voice and support the people,” one monk from Kampong Speu province told Asia Focus.

“Many protesters were stopped by the police during their journey to Freedom Park, some had to walk and change many modes of to get here. It’s a big struggle but it’s important that people are being treated fairly and being heard.” 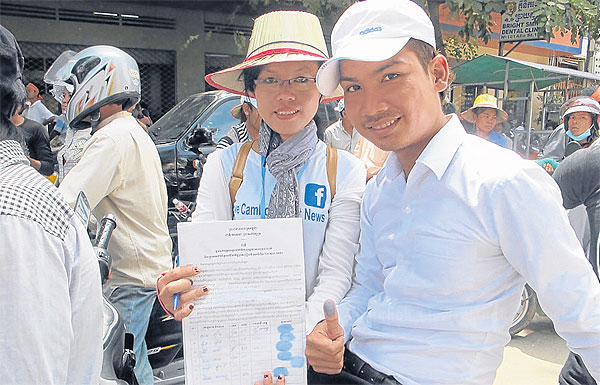 A young supporter of the CNRP shows off his thumb after adding his print to a petition to seek United Nations help in resolving the disputed election results.

Another areas packed with people was the donation tents, where participants were queuing to donate both money and food supplies to the cause. Most of them were urban office workers, businessmen or entrepreneurs, usually arriving in personal vehicles.

“I will continue to donate as much as I can. I want to see justice in this country. There needs to be a balance, not only in parliament but also in media coverage,” said Hang Vuthy, a 44-year-old businessman, who stood behind the donations tent set up a couple of metres from the stage.

“I spotted few differences in this demonstration compared to the previous ones,” said Van Sam, a 27-year old credit officer from Phnom Penh. “The first is the greater amount of people and the second is the reaction from the authorities toward the protesters. Unlike before, they tend to be less strict with the demonstrators. I believe this is a very positive sign.”

Van Sam said the fact that Cambodia’s economy was heavily reliant on international donors could be turned into a weapon for the opposition in seeking support from the international community. If foreign countries stop sponsorships or trade with Cambodia, he said, the government will not be able to run the country.

He said he personally wanted to see the demonstration prolonged until the ruling party gives up and steps down.

The power of youth and social media have also been playing a crucial role in the change in the Cambodian political landscape over the last few months. A Facebook group called “I Love Cambodia Hot News” is one of the many popular channels that Cambodian young people use to exchanges their views on what is happening in their country.

“We want to change the government and turn the country to have real democracy,” said a university student attending the rally. “We hate all kinds of injustice. Only the motivation and engagement of people will determine if we can win or not.

“We can show them our people’s power. Sooner or later, we are 100 percent certain that the people will win.”