The planned commercial development of a plot in the Makkasan area owned by the State Railway of Thailand (SRT) may push land prices nearby to outpace those on Silom Road, one of Bangkok's most expensive streets, said Naris Chaiyasoot, director-general of the Treasury Department. 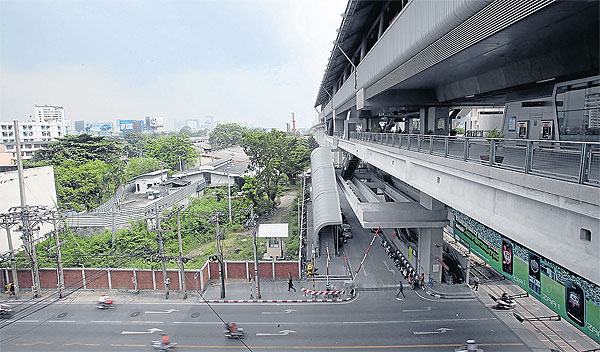 A bird’s-eye view of a green plot in the Makkasan area owned by the State Railway of Thailand. The Finance Ministry has been approached to develop the site of 497rai together with 277 rai near Rama III Road for commercial purposes in exchange for writing off 80 billion baht in debt the SRT owes the ministry. PATTARAPONG CHATPATTARASILL

The department is appraising the current value of SRT's plots in the Makkasan and Chong Nonsi areas.

Previously, the Commerce Ministry suggested that as a major landlord, SRT could develop its land in business districts as exhibition and commercial projects to promote Thai goods and services.

The advice is in line with the policy of Deputy Prime Minister and Finance Minister Kittiratt Na-Ranong, who initiated maximising the value of vast state-owned land holdings nationwide.

Mr Naris said SRT has 497 rai available out of 700 rai total in Makkasan. The plot has access to the skytrain, subway and Airport Rail Link.

Currently, the appraised land value in Makkasan is about 600,000 baht a square wah, while the market price is up to 1.5 million baht. If commercial projects are developed there, the market price could easily become one of Bangkok's highest.

"This is driven by its geological advantages. Silom is highly crowded, with lots of commercial buildings and no room to expand, so its prices may have peaked. Whereas Makkasan, a centre for mass transit networks throughout Bangkok, will expand in the future," said Mr Naris.

Another plot in the heart of Bangkok that SRT will use to clear its debt is 277 rai in Chong Nonsi, of which 70 rai are located near the Chao Phraya River.

The waterfront land is reserved for the military, which means the Finance Ministry would have to seek approval from the Defence Ministry before developing it. Therefore, the ministry has no plan yet for the plot.

The ministry also plans to allow joint development of these plots with the private sector under the Public-Private Partnership Act.

However, companies need to accept the conditions of the government, which will require a fairly large green space in Makkasan, said Mr Naris.

SRT, one of the worst-performing state enterprises, has net assets worth 157 billion baht, net debt of 101 billion, net equity of 56.2 billion and accumulated debt from operations of 75.8 billion.

Thailand is completing a master plan for state land, with a goal to maximise its use to support future economic growth in accordance with the policy of adding value to state assets.

Among state enterprises holding vast land banks are the SRT, with nearly 250,000 rai, the Port Authority of Thailand (2,400 rai, part of which is at Klong Toey Port) and the Thailand Tobacco Monopoly (600 rai including land in the heart of the capital).

The highest-priced land sale on record is on Phloenchit Road, at 1.5 million baht per sq w.