From cash to cards
Business

From cash to cards

Crawling, walking – but not yet running: Electronic banking turns one year old in Myanmar.

Just one year ago, Myanmar was a purely cash economy: there were no automated teller machines and international credit cards were not accepted, save for those of a few well-connected companies that routed payments to offshore companies.

With the easing of most sanctions by the European Union and the United States earlier this year, Myanmar’s banking landscape is being transformed, although access to banking services for the wider population remains a challenge. 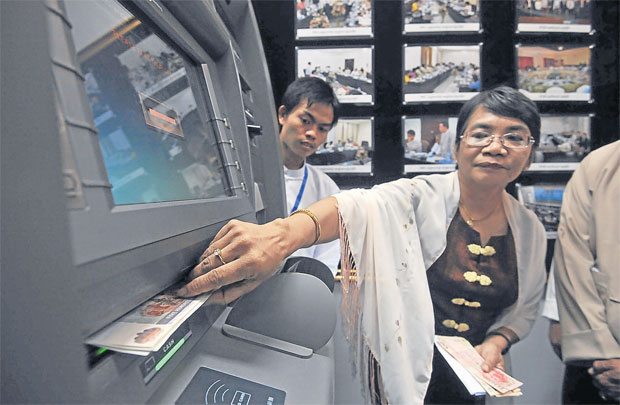 A bank staff member demonstrates the use of a new debit card at a cash machine during the launch of Myanmar's first debit card in September last year. — AFP

According to the country’s largest private bank, Kanbawza Bank (KBZ), there are now 2,500 credit card payment terminals across the country, with the majority in the commercial capital of Yangon.

“We are going to expand our ATM network to between 250 and 300 over the next 12 months and also plan to roll out ATMs not only the major cities, but also in smaller ones,” KBZ general manager Za Lin Htut told Asia Focus.

“We are hopeful about partnering with more banks. Any bank that’s interested can partner with us, so long as it complies with the US Treasury’s Office of Foreign Asset Control [OFAC] requirements,” said Antonio Corro, MasterCard’s country manager for Thailand and Myanmar.

Although the decision to exempt a bank from the US blacklist “has nothing to do with MasterCard”, Mr Corro said, “We are a public US company and cannot make any compromises as to who we do business with.”

Among the OFAC’s requirements are background checks into a bank’s ownership, as some of Myanmar’s banks are owned by individuals blacklisted by Washington because of their close ties to the former military regime.

On Feb 22, the OFAC removed four Myanmar banks from the blacklist, even though at least two are controlled by people close to the former junta and who remain on the Treasury Department’s Specially Designated Nationals (SDN) list.

The reason given for the exemption was that increased access to Myanmar banks by American companies would help promote social and economic development and serve as a model for responsible investment.

“Things are evolving. Members of the US Treasury visited Yangon recently to do some research, so I wouldn’t be surprised if the US government makes further announcements in the next few months,” said Mr Corro.

He described the banks now working with MasterCard as “very serious, cooperative and sincere. They’d been isolated for so long and want to be part of the international banking and contribute to the local economy.”

Mr Somboon said that by the end of the year, Visa expected all eight banks to be connected with Visa, which now has more than 200 ATMs and 600 points of sale.

“When I look back over the past year I’m impressed by how hard all the related parties have been working. It’s been very successful.”

Another major development occurred in the sector on Oct 8, when MasterCard and CB Bank jointly introduced a prepaid international travel card for Myanmar citizens, which allows holders to deposit up to US$5,000.

“My understanding is that there have been a lot of applications [for the prepaid travel card],” said Mr Corro.

Myanmar travellers can use the EASI Travel MasterCard to withdraw money in more than 210 countries; however Myanmar isn’t one of them.

When asked why Myanmar citizens cannot yet obtain credit cards, Mr Corro said, “It’s a decision for the Central Bank of Myanmar. CB Bank was the first bank in Myanmar to be given permission to provide a card that can be used internationally, but part of the requirements was that it can only be used outside the country.”

He said he was unaware of any specific reason why. “I think (the central bank) wants to make sure that everything moves forward in the right way. There’s a lot happening right now, such as new laws being passed, banking policies being reviewed and so forth. We will have to wait and follow what they are doing.”

Mr Somboon said it would take “some time for more sophisticated products such as Visa debit and Visa cards” to become available for local citizens.

“There will also need to be a knowledge transfer to local bank staff to operate such technology,” he said.

However, he added: “In the very near future, Visa will announce the launch of a strongly competitive product [for a prepaid card for Myanmar travellers].”

“Electricity shortages remain one of the greatest challenges [for banking], along with weak infrastructure. However ATMs are usually located in front of a bank branch, which has a power generator. So there’s not much down time,” said Mr Corro.

“We’ve definitely had our challenges in terms of infrastructure. But considering that we started [in December 2012] with nothing and that this time last year there were only about 30 ATMs, I’m really pleased by the speed of progress. We expect a growth rate of about 100 additional ATMs every year,” added Mr Somboon.

“Last year wasn’t so good” in terms of the number of transactions successfully authorised, he acknowledged. “But right now it’s quite comparable to the system efficiency in neighbouring countries. However, it remains a fact of life in Myanmar that there won’t always be an electricity supply.”

“MasterCard holders usually check our website to see where we have a presence. We now have 500 merchants accepting MasterCard in Myanmar – mostly at hotels and elsewhere in the tourist industry. It’s very encouraging to have 500 points of sale in the third quarter.”

Some may also feel wary using the technology in Myanmar, and not without justification.

“Many people have problems using credit cards in Myanmar, whether it’s paying a $1,000 bill but being charged $10,000, or requesting a withdrawal of 200,000 kyat at an ATM and getting 100,000,” said French citizen Florian Guerithault.

“Once I tried to withdraw 100,000 kyat and I never got the money, but it was deducted from my account. There’s no security in banking here.”

French citizen Natasha Schaffner, who owns the Alamanda Inn and has lived in Yangon for nine years, said, “I have no plans to open a local savings account, because I still don’t trust Myanmar banks.”

However local people – of whom only a tiny minority now have access to banking services – appear more enthusiastic about moving cash savings into a bank.

Htun Phu Nin Htay, 22, is currently saving up to pursue a master’s degree, said she opened a savings account with United Amara Bank three months ago. This was a shift away from the past when she used to give her salary to her parents and they kept it under their mattress at home.

“I feel safer knowing that my money is in a bank.”

Visa’s Mr Somboon said that the cumulative figure for ATM withdrawals and POS transactions in Myanmar stood at $15 million, which pales in comparison to Thailand, where Visa processes $2 billion a year.

He is hoping that 300 ATMs will accept Visa within the next year.

“It’s hard to predict what the figure could be by this time next year, but if travellers make use of the Visa card in Myanmar, I believe there will be an exponential increase.”