Ecco, the Danish shoe manufacturer, has closed its operation in Phichit province to consolidate its business in Thailand and cut operating costs due to the minimum wage hike. 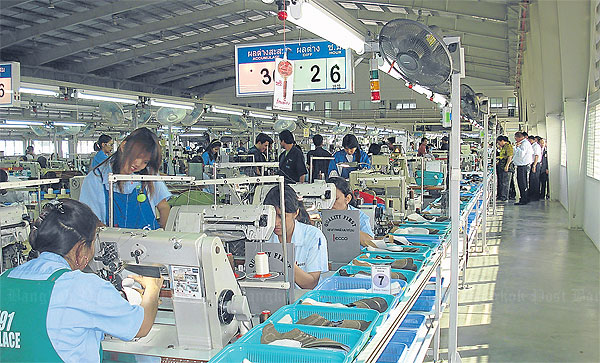 Workers sew at Ecco’s now-defunct Phichit plant before the company looked to consolidate. Ecco offered labourers the choice of moving to work at its main plant in Ayutthaya province. SITTHIPOJ KEBUI

The closure affects 1,138 employees, 1,000 of which are working on a daily basis with the rest on a monthly wage.

Ecco announced it will rehire these staff if they want to work at the company's main production plant in Ayutthaya.

Phichit governor Surachai Kan-asa said he ordered social welfare officials to examine the reason behind the shutdown and how to assist employees. He acknowledged the daily minimum wage rise to 300 baht nationwide was the main cause of the six-year-old plant closing.

Minimum wages previously varied in the provinces, ranging from 159 to 221 baht to promote investments to rural areas. In Phichit the daily wage was 170 baht, attracting several investors including Ecco, with its factory located in the Phichit Industrial Estate.

The factory makes parts to support its core operation in the Saha Rattana Nakorn Industrial Estate in Ayutthaya, which was damaged during the 2011 floods.

"After the floods, we looked for ways to improve management efficiency, and we decided to consolidate these two factories," said Gitsada Boonchirt, a director on Ecco's board.

After consolidation, it plans to expand production by doubling stitching lines to 20 in the next 20 months, at a cost of nearly 100 million baht, he said.

The firm needs an additional 1,000 workers on top of its current 2,000 employees to make 3.3 million pairs of shoes this year, for revenue of 3.3 billion baht. The expansion is expected to help Ecco Thailand reach 3.8 million pairs as targeted for next year, projected for 4.1 billion in revenue.

The Thai operation is one of three leading production plants for the Danish shoe makers including China and Indonesia. Ecco also operates small operations in Portugal and Slovakia.

He said about half of the workers in Phichit expressed interest in moving to work in Ayutthaya. Those who move will receive 4,000 baht as a moving allowance and 2,000 baht for a monthly accommodation expense for three months.

The company complied with labour laws by compensating staff who do not want to move to Ayutthaya, he said. The province's labour protection welfare unit reported Ecco paid 45 days wages for temporary workers, 75 days for permanent staff as well as other necessary remuneration, such as compensation for abruptly closing operations.