Telenor to pour B34bn into Thailand

Telenor of Norway, the major shareholder of Total Access Communication (DTAC), has allocated 34 billion baht for network investment in Thailand over the next three years after the local operating unit reported continued high performance. 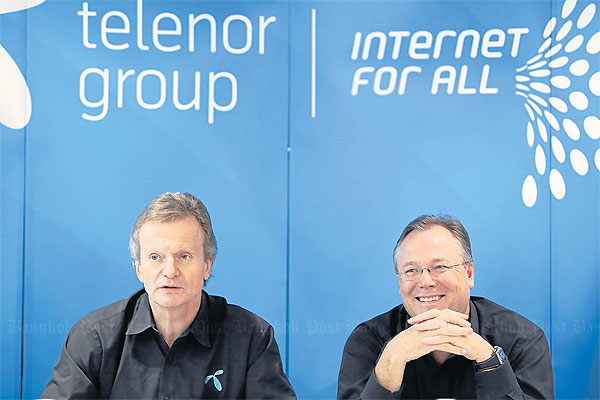 Mr Baksaas said Thailand is a big country, so nationwide coverage is a crucial factor in competing with rivals and differentiating service quality, said Mr Baksaas, who is also the chairman of the GSM Association.

Telenor expects DTAC to continue focusing on providing reliable and affordable mobile services with sustainability profitable to maintain its high-level satisfactory performance, he told a group of journalists on the sidelines of ITU Telecom World 2013 at Impact Muang Thong Thani.

Mr Baksaas also praised telecom regulators for pushing the Thai telecommunications industry to transition from a concession-based system to a licensing regime. This has promoted greater freedom and fair competition in the industry.

He said in the third quarter alone DTAC had 800,000 users of its Trinet smartphone brand, making up one-third of all smartphone brands. DTAC expects to have 10 million 3G users this year.

"We plan to cut the prices of our Trinet phones by half next year in order to stimulate data usage," said Mr Abdullah. "We plan to encourage all of our customers to connect to the internet by 2015 under our 'Internet for All' policy.

He said DTAC expected revenue growth of 5-7% this year and 5% next year.

Telenor expects 1-2% revenue growth this year, with earnings before interest, tax, depreciation and amortisation of 34%.

Half of Telenor's revenue comes from Asia through 133 million subscribers.

Commenting on the ongoing political uncertainty in Thailand, Mr Baksaas said he's relying on the economic outlook, than the political one.

"The telecom sector is a long term-oriented industry. We continue to invest as technology and telecoms is a need," he said.

But Mr Baksaas said further spectrum allocation and more affordable 4G-phones are needed to encourage Thailand to usher in the next generation of mobile technology.