Back home after years of exile, Sam Rainsy sees time and public opinion on his side in the struggle to establish democracy in his homeland.

During a lunch break on the second day of a three-day mass protest last month in Phnom Penh, Sam Rainsy reflected on the irony of his situation. Here he was at the head of a large and growing movement to overturn the results of an election in which he wasn’t even allowed to run. 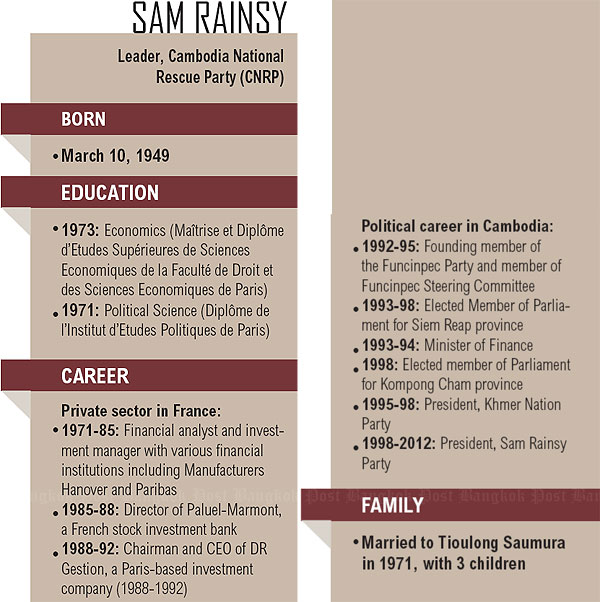 “Before they tried to kill you physically, but now they will kill you politically, through the judiciary,” he observed sardonically, responding to a question about security, given the fact that he had been the target of assassination attempts in the past.

Since he returned from self-imposed exile in France just before the July 28 election, Mr Rainsy has been free to move about, having been granted a royal pardon that spares him from a prison sentence for convictions he says were politically motivated. He sees it as part of Prime Minister Hun Sen’s political game to use him as a way of showing the international community that democracy in Cambodia is improving.

“By having me doing my thing, they can pretend and say that opposition leader Sam Rainsy is active and Cambodia is moving toward a better democratic environment. I am aware of political security, but I’ve also noticed that now I am being used in a more sophisticated means.”

As he spoke, some 20,000 demonstrators were massed in Freedom Park, asking for international intervention in the political standoff. That intervention never came, but hopes are rising that positive changes will soon be seen in a country that has been devastated by decades of war, authoritarian rule and widespread corruption.

For the leader of the opposition Cambodian National Rescue Party (CNRP), the determination to create real democracy burns as brightly as ever. The journey has been a long one, though.

Currently holding a French passport, Mr Rainsy studied finance and business in Paris and started his career in the banking industry and later set up his own accounting firm. He met his wife and got married there. However, his stellar education and aristocratic background have come with a price.

In his autobiography, We Didn’t Start the Fire: My Struggle for Democracy in Cambodia, published earlier this year, he recalled that his university years were filled with feelings of guilt mixed in with happiness, given that he was the only one in his family who was lucky enough to get a university degree. His older siblings had to work and help support his mother to pay the rent and buy food when they were political refugees in France.

“During the time the regime was going after my father, Sam Sary. He was accused of being part of an unsuccessful coup and the opponent of then Prince Norodom Sihanouk, and my family was expelled to Vietnam,” he told Asia Focus.

“We tried to stay put in Cambodia and then succeeded in making our way to France as political refugees, possibly the first Cambodian refugees to be accepted in France.”

Even his love life was not all that smooth, as the girl he fell in love with turned out to be the daughter of one of the Prince Sihanouk’s closest allies.

It was only in 1970 when Sihanouk was overthrown by a US-backed coup lead by Lon Nol, that both of them got married as Mr Rainsy had been too scared to ask his sweetheart’s father for her hand earlier.

None of the couple’s three grown children, two boys and a girl, has expressed any willingness to enter politics.

Asked what made him decide to leave his career in the financial sector and enter politics in Cambodia, he said it was purely his passion to help save the country.

“We don’t need to be invited into politics, it is our country, so I volunteered,” he said firmly. “I already had a comfortable life but I gave up my career to work full-time as a politician because I realised it was a good opportunity for me to save Cambodia.

“The country was under the Vietnamese occupation after the Khmer Rouge and the killing fields, many civil wars had weakened the nation dramatically.”

Deciding to put his past personal resentments behind him, he joined with Prince Norodom Ranariddh’s Funcinpec party and got fully involved in the royalist movement. Elected as Siem Reap’s representative for Funcinpec in 1993, he became finance minister and served in that position for nearly 18 months. He rapidly gained a reputation as a maverick who was willing to speak out against the government and the Funcinpec leadership.

“I saw that the Cambodian coalition was very corrupt and they were destroying the country, particularly the deforestation law,” he recalled. “I dared to speak out, to denounce corruption within the government and within my own party. I ended up being expelled from my party, from the cabinet and then from the parliament.”

A year later he founded his own party, the Khmer Nation Party, and he has been fighting against the strong power of the ruling powers ever since.

Looking back on his term as finance minister, he believes he proved himself in the eyes of the international community with his strong convictions and willingness to serve the people’s real interests.

“I lowered inflation. I increased the salaries of civil servants. It was a period when people enjoyed the time of economic stability and prosperity of the improvement,” he said. “These were actually the reasons why the CNRP is strong today — partly because of my reputation, my political support that started back then. They have been following me for 20 years, and they continue to tell their children to support me.”

As a long-time rival to Prime Minister Hun Sen, Mr Rainsy says he is happy to witness the change in his country’s political landscape, particularly the involvement of young Cambodians, many of whom share their convictions through social media.

“[I am happy to see] the engagement of young people who did not know me before. They don’t know my past achievements but they decided to get involved with us. They consider my party as the hope to bring about a better future for the country and for themselves. The trust of the people. To me, this is the biggest achievement. This is an invaluable asset.”

Mr Rainsy remains highly concerned about the economic situation in Cambodia, which is not very sustainable or equitable enough to create a sufficient number of jobs for new university graduates.

Many young Cambodians in their early twenties end up being unemployed or forced to take jobs that require fewer skills than what they have acquired. One of the reasons is that investors remain wary of setting up the types of businesses that would create quality employment opportunities.

“We need to ensure the rule of law and the national interest. Under the current ruling party, the law depends on Prime Minister Hun Sen’s thinking or his mood,” he explained.

“Legitimate investors dislike these sorts of unpredictable actions and this is why the country’s economy relies on those investors who are willing to pay money under the table. This is very bad, we have to put things right.”

Just before the three-day rally, Mr Rainsy had returned from the trip to the United States and Europe where he urged Western countries not to recognise the newly formed Cambodian government. Nevertheless, he acknowledged candidly that it was a tedious process requiring a lot of effort to capture international attention.

“Cambodia is a small country, we are not on anyone’s radar screen. Very few people know about the real situation in Cambodia, and even fewer care. However, I want to stress that it is a matter of principle to defend freedom all over the world. When they defend democracy in their own countries, they should apply the same standard far away as well.”

His travels, he said, have been mostly about awakening consciousness and changing some misconceptions.

“Some may hold a perception that for a third-world country such as Cambodia, having the opportunity to have second-class election is already good enough. But what I attempted to say was that this is a human rights issue that should be applied universally to everybody in every country in the same manner.”

He does admit, though, that since he returned to Phnom Penh in July he has seen many positive signs that could lead to a possible transformation going forward.

“I think Cambodia is at the turning point. We have the same ingredients for the revolution as seen in the Arab Spring — the mass of young people, high unemployment, extreme poverty, injustice, corruption, the rising usage of social media which allows people to get mobilised very fast. These are the factors that will put the country in position for a change.”

He views Hun Sen, Asia’s longest-serving prime minister, as a leader without vision whose ambition is only to survive and cling to power.

Mr Rainsy said that Hun Sen’s past as Khmer Rouge commander and his pro-Vietnamese administration have brought and will continue to bring a negative impact to the country.

“The legacy of the Khmer Rouge is still in the mindset of the current leader. The perception of having absolute power and being able to do whatever he wants with impunity is still there,” he said. “This is an approach to survive and the reason why he has been in power for 28 years. However, it also prevents him from having a long-term vision and this is why Cambodia has been going nowhere.”

No leader is indispensable, says the 64-year-old politician. He believes it is important for any organisation or country to prepare successors. His own party would impose a term limit if it is elected.

“It should be no more than two terms, the maximum is 10 years,” he said. “I have also prepared young people to replace me. My party in general is trying to promote young generation.”

Meanwhile, he is determined to live up to the faith those young people have placed in his leadership by remaining true to his ideals and refusing offers to join the current administration.

Restaurant, food and tourism-related businesses are slowly recovering thanks to the country's reopening to international tourists and increased arrivals, reflected in the latest new business registration figures released by the Commerce Ministry.

Fares on the MRT Blue Line will remain unchanged, at least until the end of this year, after the cabinet approved a hike on Tuesday, according to the Transport Ministry.