The hospitality business in Myanmar is on track for further growth, although investors should conduct project feasibility studies and avoid speculative investment, says tourism and property consultancy firm C9 Hotelworks. 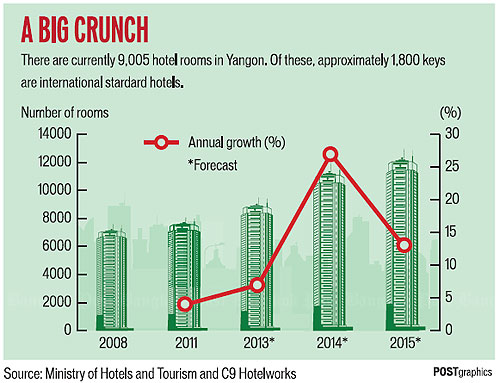 In both hospitality and real estate, C9 Hotelworks is now working on many projects in the country, catering for keen interest from both Thai and international investors, he said.

In 2012, international passenger arrivals at Yangon Mingaladon Airport soared by 53% to touch a historic high of 550,654.

Foreign tourist arrivals to Yangon continued to surge in the first five months of 2013, up 36% on the same period in the previous year.

Myanmar is now developing a new international airport at Bago, 80 kilometres north of former capital Yangon, with an annual capacity of 12 million passengers to meet an expected growth in business and tourism arrivals.

Yangon already has 9,005 hotel rooms, serving the top five tourism markets of Thailand, China, Japan, the US and South Korea, which together provide 48% of guests. Free independent travellers also rocketed by 72% in 2012.

Reflecting its continuing shortage of hotels, rooms at upscale and luxury properties in Myanmar can run at $150-250, similar to the rate for unsophisticated Bangkok hotels, Mr Barnett added.

But, although occupancy and room rates are rising, demand remains volatile, with a steep drop in low season.

A continuing surge in land prices in areas such as Yangon indicates large-scale property speculation, while plans to redevelop government-controlled properties in the city face challenges, he added.

Investors should also be alert to laws and regulations, said Mr Barnett.

Uncertainties over Myanmar's ownership legislation and investment law, along with the lack of a debt market to finance projects, pose risks for which investors should expect superior returns, he said.