Megaproject's backers hope to put troubles behind them.

After years of uncertainty, the prospects of the massive Dawei project took a recent twist when Thailand and Myanmar officially tied the knot to push the ambitious scheme forward. 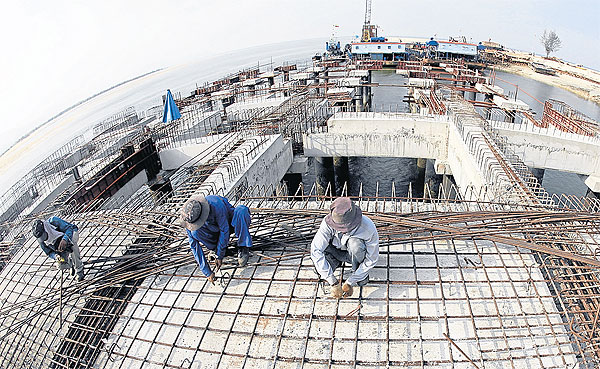 Workers build a port as part of the Dawei project. THITI WANNAMONTHA

With three memoranda of understanding signed by the two countries in November, the Dawei concession was transferred from Italian-Thai Development Plc (ITD) to Dawei SEZ Development Co (DSEZ), a special-purpose vehicle for the project.

DSEZ, a 50-50 venture of Thailand and Myanmar, now has a 75-year concession from Myanmar's government to develop the special economic zone and a deep-sea port _ replacing ITD, which had received the concession from the Myanmar government in November 2010.

Thailand and Myanmar agreed in June to set up DSEZ with an equal shareholding and an initial investment of 12 million baht, far below the 100 million baht proposed earlier. The company will be registered in Thailand.

The second memorandum revoked concessions between ITD and Myanmar, while the third obliges new investors to reimburse ITD for its expenditure on building a small port and roads estimated at 6 billion baht.

DSEZ is expected to award concessions for three projects _ a dual-lane highway linking Thailand with Dawei, a small port and an industrial estate _ by the second quarter of 2014.

ITD, meanwhile, can also bid on the three projects under the new plan. Initially, the contractor will team up with Rojana Industrial Park and other partners to bid on industrial estate development at Dawei, covering 30,000 rai at an investment of 100 billion baht.

ITD had estimated it would need US$9 billion (284 billion baht) to develop 128,171 rai (20,507 hectares). Scarce progress was shown by ITD in developing the site given the massive investment required, raising doubts among observers over whether Dawei would happen.

ITD president Premchai Kanasutra accepted that switching the concession from his company to DSEZ would make the project viable, and that government cooperation would build confidence with foreign investors.

The Dawei development is four times the size of the Thilawa SEZ that Japan has already committed to, but caretaker Commerce Minister Niwatthamrong Bunsongphaisan has said that Dawei's site in eastern Myanmar will make it competitive as the deep-sea port sustains export-oriented industry.

Located some 350 kilometres from Bangkok by road, the project is envisaged as a key component of the East-West Corridor and supports Thailand's vision of becoming the logistics hub of Asean.