The Finance Ministry has lowered its 2014 economic growth forecast for the second time in less than a month, while Moody's Investors Service warned that the prolonged political protest will weigh heavily on economic expansion. 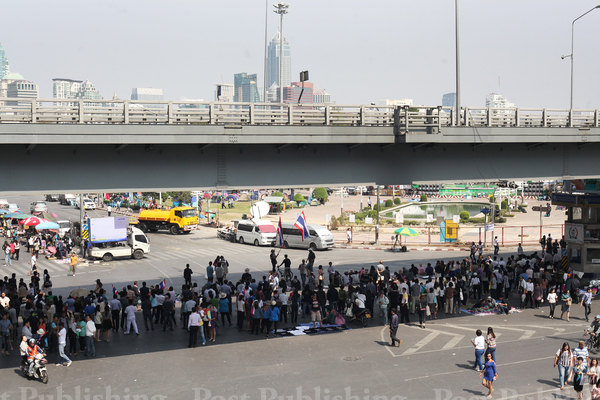 Gross domestic product (GDP) may grow by only 3.1% in 2014, Somchai Sujjapongse, director-general of the Fiscal Policy Office, said after a meeting of economic ministers chaired by caretaker Finance Minister Kittiratt Na-Ranong on Thursday. The ministry had lowered its growth forecast to 4% from 5.1% on Dec 26.

Mr Somchai said the forecast was based on the assumption the general election takes place on Feb 2 as scheduled and the new government is in place soon after that.

He warned that the ongoing anti-government protests led by the People's Democratic Reform Committee (PDRC) could well trim gross domestic product growth in 2014 to less than 2%.

If the political turmoil is prolonged, delaying the formation of a new government, it would erode confidence of investors and manufacturers, he said.

The lowered projection of economic growth was due to the delay in the disbursement of the government's planned investment in its 2-trillion-baht infrastructure development megaprojects, he said.

Thailand has seen more than two months of anti-government protests led by the PDRC aimed at erasing the influence of caretaker Prime Minister Yingluck Shinawatra and her brother Thaksin, who was ousted as premier in a 2006 coup and later convicted of abuse of power.

Protest leader Suthep Thaugsuban has said protests will continue until Ms Yingluck steps aside and a ''people's council'' is installed to reform the nation before a new election is held.

"A key credit-negative feature for the sovereignty is the prolonged political protests, which will weigh on an already fragile growth outlook for 2014,'' Moody's said in a statement on Thursday.

Goldman Sachs Group Inc also lowered its forecast for Thai GDP growth this year to 3.6% from 4.2%, citing increased political uncertainty. The bank expects an interest-rate cut by the Bank of Thailand (BoT) this quarter, and a slightly weaker baht in the near term, analysts wrote in a note on Thursday.

The BoT is scheduled to announce its next rate decision on Jan 22. Six of seven economists surveyed by Bloomberg expect the benchmark to be cut by a quarter of a percentage point to 2%, with one predicting no change.

The Thai Industries Sentiment Index (TISI) fell to its lowest level for 25 months in December, chairman of the Federation of Thai Industries (FTI) Payungsak Chartsuthipol said on Thursday.

The index dropped from 90.3 in November to 88.3 in December, the chairman said, its lowest point since December 2011.

The FTI conducted an industry confidence survey of manufacturers in various industrial groups in December.

The manufacturers were worried that if the political turbulence was prolonged, it would result in a slowdown in economic activities and domestic consumption and it would also delay orders by Thailand's trade partners. Increasing production costs and oil prices also eroded manufacturers confidence, he said.

The FTI chief said the survey found that manufacturers want the government to work to settle the drawn out  political dispute by peaceful means as soon as possible.

The manufacturers also wanted the government to come up with measures to stimulate domestic consumption and help find financial sources to provide soft loans for small and medium enterprises (SMEs) to improve their production efficiency, he added.