Going against the grain
Business

Going against the grain

It's hard to figure out how much rice the government has officially sold and kept under its pledging plan that started two years ago. That's because all records are kept secret for what the Commerce Ministry calls "business reasons". 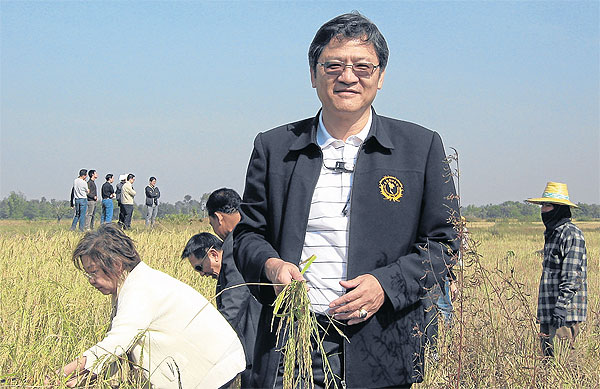 ‘The only way to clear up this mess is to end the pledging scheme in order to cut rice supply,’ says Mr Charoen. WALAILAK KEERATIPIPATPONG

The public knows only that the rice pledging scheme has cost the country more than 700 billion baht in budgets so far, with losses projected to exceed 200 billion baht, according to economists.

Plagued by rampant corruption, the pledging scheme is the most controversial policy of the Pheu Thai Party.

Yet the party vowed to carry on with the programme if re-elected despite heavy criticism and a lack of funds to pay farmers at this time.

Charoen Laothamatas, the newly elected president of the Thai Rice Exporters Association, said if the scheme must continue, the pledging volume and payments should be limited to contain the damage.

Farmers should be paid directly for essentials such as fertiliser and seeds in order to lower their costs and help improve their income.

"We're quite worried this glut will continue to be a burden on Thai rice exports," he said.

At first the government was not worried about slow sales, as it thought it could sell the grains later or wait until demand soared, but that scenario never materialised.

With 460 million tonnes of rice produced worldwide, the commodity is in a buyer's market at the moment. Some 8-9% or about 38 million tonnes is for trade, with up to 20 major sellers including India, the US and Vietnam.

The Knowledge Network Institute of Thailand said the country does not dominate world rice trade the way it used to.

"The only way to clear up this mess is to end the pledging scheme in order to cut rice supply," said Mr Charoen.

An average of 21-22 million tonnes of milled rice is produced each year, with 11 million tonnes used locally for consumption, industrial use or reserves and the rest for export.

But export volume has been dropping for years after annual exports of 9-10 million tonnes from 2008-11.

"The objective of buying every grain of paddy from farmers has discouraged them from making a good-quality grain," said Mr Charoen.

Exports of fragrant rice, mostly Hom Mali, were high at 2 million tonnes last year, but sales to conventional markets such as Hong Kong and Singapore did not increase much.

"This year the competition for premium grains remains stiff, as Vietnam can offer an attractive price of $600 a tonne for jasmine rice, 40% lower than Thai Hom Mali," said Mr Charoen.

It may take two or three years to clear up the glut once the pledging scheme is terminated and local supplies are trimmed.

"We should export only freshly harvested rice. The grain in stock should be gradually improved and sold domestically," said Mr Charoen.

"Thai consumers are normally not fond of eating freshly harvested rice, as they consider it too soft and sodden."

Local sales may come with promotions to clear stock quickly, leading to further losses. But these, he hopes, would be the last.