A hotel price war is expected in Bangkok once the political turmoil ends. Tourism-related businesses expect to see losses from the anti-government protests that began last November at the start of the high season. 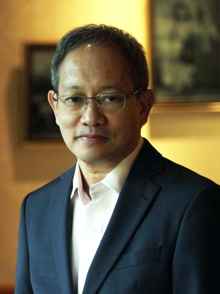 However, when the political unrest ends and the hotel sector starts to bounce back, hoteliers will probably use pricing to grab a larger slice of the cake.

"The government will only do promotions such as grand sales to lure back tourists, but this will not be enough, and hoteliers will try harder to play with pricing. It's not 100%, but we expect to see this situation," he said.

He hopes the political problem will be solved this week. If the situation is prolonged, hotels in Bangkok will see their room rates plunge dramatically, especially the rates quoted by international travel agents.

Dusit had expected average hotel room rates in Thailand to start increasing this year and that 2014 would be the best year for the hotel and tourism business since 2008.

"That hope was ruined with the rising temperature from political problems as the Yingluck Shinawatra government insisted on moving forward the blanket amnesty bill," Mr Chanin said.

"I want to know what will happen next? When will all the problems end? The average hotel room rate in Bangkok remains lower than in 2007, while other destinations such as Singapore, Hong Kong and Malaysia have seen their rates increase continually."

If the protests do not end by early March, hoteliers attending ITB Berlin 2014 in Germany from March 5-9 will face hard times because travel agents will lower their room prices substantially.

Dusit accepts it will miss its 10% revenue growth forecast this year because its major revenue-generating hotel, Dusit Thani Bangkok, has been affected by the political unrest.

As of last Thursday, the hotel's occupancy rate was only 20%, compared with 80% normally.

The company pins its hopes on the next high season starting in the fourth quarter and hopes political problems will not resurface.

Thailand's tourism industry has faced difficult times due to political problems since the end of 2008.

"We realise it is too risk to rely on business in Thailand, so we have to expand our business abroad," said Mr Chanin.

Dusit operates 12 hotels in Thailand and 11 properties internationally. It will add 16 hotels abroad soon, while 15 others are under development.

Thailand's economy grew faster than expected in the first quarter supported by a pickup in agriculture and an easing of Covid-19 curbs, but higher inflation remained a drag on a fragile recovery.