Workers are on edge as orders are down and manufacturers streamline their personnel.

Workers at the Dhaka-based garment manufacturer Sidko Apparels Ltd have become very particular about their attendance. They are all afraid of losing their jobs.

Workers sew clothes at an unregulated factory in Dhaka, Bangladesh.

“It has never been this bad,” Sadaf Saaz Siddiqi, the marketing director of the 30-year-old firm, tells Bangkok Post over the phone. “There are far less orders in the market for this time of the year, and like many others, we are running grossly under capacity. Recruitments have frozen and many manufacturers are streamlining their workforce.”

“At least 500 active factories have closed down; 1,000 mid-sized factories have been shuttered, and most of us are looking at our quantity projections from customers trying to reconcile the smaller orders in 2014. Order projections have dropped by almost 25%,” wrote Mohammadi Group managing director Rubana Huq in her column in The Daily Star.

Bangladesh is the second-largest exporter of garments in the world after China, and is a supplier to major retailers such as Walmart and H&M. The ready-made apparel sector is the latest casualty of the large-scale political violence the country witnessed surrounding the Jan 5 national polls. The nation was paralysed by a spate of general strikes and road and rail blockades organised by the opposition Bangladesh Nationalist Party (BNP) and allies. Over 150 people were reportedly killed in political clashes in the months preceding the elections.

Incumbent Prime Minister Sheikh Hasina refused to hold elections under a neutral caretaker government, as was the practice since 1991. An 18-party alliance led by the BNP boycotted the polls in protest. On Jan 12, Ms Hasina assumed the prime minister’s office after her party, the Awami League, won the boycotted elections that saw extremely low turnout. More than half of the 300 elected seats were won uncontested even before the elections. The victory has been criticised by a large section of the international community, including the European Union that makes for over half of Bangladesh’s garments export market. Not known for retreating after a letdown, the opposition BNP, led by Khaleda Zia, is expected to strike back, threatening protracted political turmoil. Speculation is rife of a fresh election in the not-so-distant future. 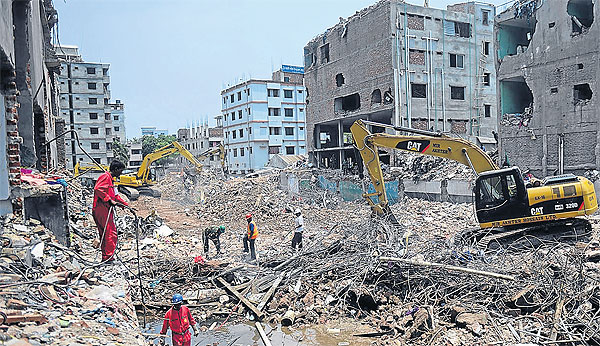 Bangladeshi Army personnel use heavy equipment as they continue to clear debris after an eight-storey building collapsed in Savar, on the outskirts of Dhaka.

The $22-billion garment industry that accounts for 80% of Bangladesh’s exports has seen orders cut nearly in half the last three months — the worst drop in two decades, reported Reuters quoting the Bangladesh Garment Manufacturers & Exporters Association. Nearly $1 billion worth of business could be at risk if the situation doesn’t improve by June 2014.

The sector was thrust into the news with the infamous Rana Plaza collapse on April 24, 2013, in which 1,127 garment workers were killed. The US suspended trade privileges under the generalised system of preferences (GSP) following the incident.

“That incident generated a lot of negative publicity for us, some of which was unfair for those factories that were compliant with international norms,” said Ms Siddiqi. “Buyers became more stringent on compliance. Manufacturers incurred huge expenditures to improve their infrastructures and modernise their facilities. Then workers’ wages increased by 76%, raising the financial burden considerably.”

The wages were increased in November after a wave of protests and mounting international pressure following the Rana Plaza incident. “The wage hike came after orders were already placed, so it has been difficult to pass the cost on to buyers. We were hoping to begin asking retailers to pay for the hike with their next orders, but the political violence has worsened matters. Orders are just not coming in. One of our buyers reduced orders by 40%. How can we negotiate prices in such a situation?” said Ms Siddiqi. The most vulnerable are the small factories that depend on sub-contracts from larger ones to survive, she added.

In addition to the political instability is the fear of EU sanctions. The EU could withdraw GSP privileges from Bangladesh if the two matriarchs, Ms Hasina and Ms Zia, do not reach a consensus and hold fresh, inclusive elections and end the ongoing political turmoil.

“It will be heartbreaking if the privileges are suspended,” said Ms Siddiqi. “Suspending GSP privileges will be disastrous for Bangladesh. This is a labour-intensive industry employing mostly women. It will have a ripple effect on everything else.”

Meanwhile, an uneasy calm has descended on the factories, with everyone trying not to make mistakes. Workers show up for their shifts on time, and owners are doing all they can to ensure shipments arrive on deadline.