The tourism outlook in major destinations such as Phuket and Chiang Mai remains good even though the current political deadlock is undermining the industry in Bangkok. 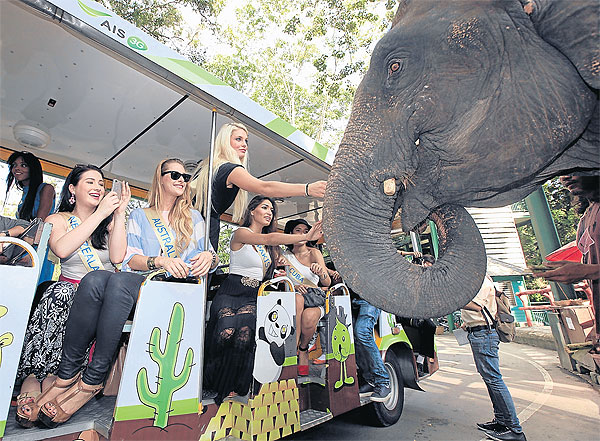 Feeding the elephants is a favourite activity enjoyed by visitors to Chiang Mai Zoo. PHRAKRIT JUNTAWONG

Phunut Thanalaopanich, president of the Thai Hotels Association's Northern Chapter, said the tourism sector in the North, especially Chiang Mai, has been doing well since the start of the year thanks to the cool weather.

Tourism operators in Chiang Mai are enjoying high bookings for hotel rooms and package tours during the run-up to Chinese New Year. Advanced reservations are full from Jan 30 to Feb 10, pushing the average room rate up by at least 10%.

"It's the best time for tourism in Chiang Mai. The number of Chinese tourists will hit a record again this year. During the Chinese New Year celebration, tourism revenue will be at least 600 million baht, up from only 100 million baht last year," Mr Phunut said.

Kasian Watanachaopisut, president of the Thai-Chinese Tourism Alliance Association, estimated the number of Chinese tourists celebrating Lunar New Year in Thailand would be on par with last year's figure of 300,000.

The projection has been cut by half due to the impact of the Bangkok shutdown, which has shaken the confidence of many Chinese travellers.

"The political problem hasn't affected tourism in Phuket because it is the high season for European tourists, who represent almost 80% of total arrivals to the island, while visitors from other countries account for the remainder," said Suchart Hirankanokkul, president of the Thai Hotel Association's Southern Chapter.

About 20% of charter flight bookings to Phuket during Chinese New Year are from China.

Somchart Pimthanapoomporn, president of the Hat Yai-Songkhla Hotel Association, said about 20% of hotel reservations during Chinese New Year in Hat Yai have been cancelled due to growing concerns about bomb threats by southern separatists.

If there are no further bomb attacks, bookings are expected to bounce back quickly.

Tourism generates 100-200 million baht in Songkhla during Chinese New Year, but concerns over safety, especially among Malaysian tourists, will drag down the revenue target this year.