Reeling from the wage hike
Business

Reeling from the wage hike

Government-mandated increase has led to lay-offs amid a labour shortage and even lower earnings.

It was just another morning when Somporn, a 40-year-old worker in a ceramics plant, awoke to find she had lost the job she had held for several years. 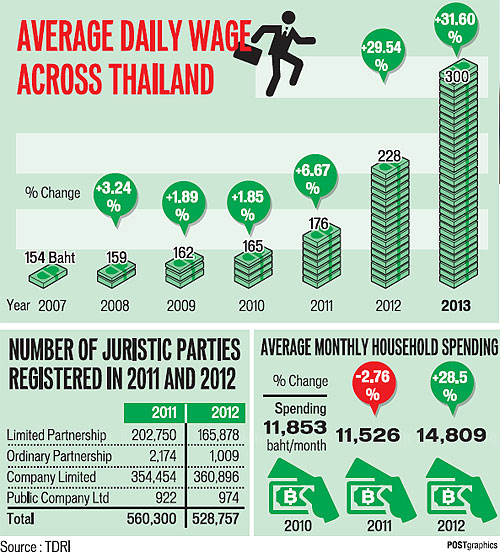 In fact, she'd anticipated this day would come, as the plant had downsized operations in response to the 300-baht daily wage. The factory agreed to pay a small compensation to laid-off workers.

Mrs Somporn is among the large number of workers laid off by companies that can no longer shoulder higher labour costs after the Pheu Thai-led government raised daily wage to 300 baht nationwide on Jan 1, 2013.

The government implemented this populist policy in order to narrow the income gap as well as to draw grass-roots votes.

However, 21 months after its implementation, has the wage hike improved the lives of those on the lower rungs of society?

"The policy hasn't really helped ease the lives of workers as a large number of them have been laid off as many factories struggle to survive amid a sharp rise in production costs driven by the hike in daily wages," said Wilaiwan Sae Tia, vice-president of the Thai Labour Solidarity Committee.

"Many companies have laid off workers without compensation while many only offer 30-50% of the compensation required by law," said Ms Wilaiwan, noting that many cases have been brought to court but it is hard to force employers to pay full compensation.

"Even the government can't really make employers comply with the law. So the workers are left on their own," she said, adding that during the past two years the number of workers being ripped off has increased sharply.

"The policy has not only failed to reduce the income gap but even ruined the lives of many," she said.

The Federation of Thai Industries (FTI) said that since the wage hike, more than 100,000 small and medium-sized enterprises out of 2.9 million SMEs nationwide have closed down, as they could not adjust to the quick rise in wages. Most of them were located outside Bangkok. Currently 90% of the country's business operators are SMEs, contributing 35% to the country's gross domestic product.

A producer of tiffany lamps for exports located in the Ladkrabang Industrial Zone is planning to shut its 23-year-old plant within the next few months. According to the plant manager, who asked not to be named, the new rate of daily wage has pushed up production costs by 30-40% which has forced the company to raise prices. As a result, the company can no longer compete with competitors due to their higher prices.

The company has downsized its workforce from 500 to 45 workers. "That's because our orders have largely dropped as customers look elsewhere for the same products. So we're about to close our factory soon," she said. 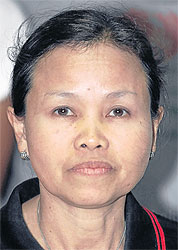 Wilaiwan: Workers are left on their own

"If SMEs don't get help soon, there will be more of them closing down," said FTI vice-chairman Wallop Vitanakorn.

Most big and financially sound business operators have adapted to the changes as they have access to funds. However, most SMEs face problems such as access to financial sources as well as the dearth of quality human capital and know-how to help boost productivity and output.

"SMEs have always faced a liquidity problem. And the Thai education system is to be blamed for failing to produce quality human resources to meet the demand of the industries. So SMEs are left in the middle of nowhere," Mr Wallop explained.

At what and whose cost?

Yongyuth Chalamwong, research director at the Thailand Development Research Institute (TDRI), said labour-intensive sectors including garments and ready-made clothes, furniture, leather products, ceramic goods have been hit the hardest. Meanwhile, the auto industry has adjusted to the changes better than others since most auto plants are fully-automated.

The new daily wage has pushed up the cost of production by around 40% in general.

According to Mr Yongyuth, this is evidence that a large number of businesses discontinued operations while the number of start-ups also dropped.

Theoretically, he added, when labour costs rise, productivity and prices are bound to increase so the business can survive.

"However, some SMEs are unable to increase either productivity or prices or both, so they can't survive," Mr Yongyuth said, adding that normally productivity should increase by 8% per year for a business to run smoothly while the normal rise in daily wages 4-5% a year.

It is essential that SMEs improve their production process and improve productivity through the implementation of lean management while building their own brands.

"Lean management includes letting go of employees or workers delivering low productivity. This has obviously happened for the past two years. Though it may seem harsh, it helps boost productivity."

Given the short-term negativity faced by the SMEs, he believes competitiveness on the micro and macro scales will be lifted in the long run.

"It inevitably forces businesses to invest in technology and automation. And if they are able to upgrade to full-automation, then the entire competitiveness of the country will jump and we'll compete better in the world market," said Mr Yongyuth. 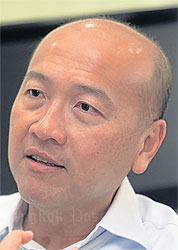 "This may be able to boost the competitiveness of many industries and the country in the long term but that only for medium to large sized companies equipped with sound financial resources and know-how. And SMEs obviously don't have those," said Mr Wallop. "We can't really talk about long-term development when many SMEs can't survive short-term struggles," he added.

Suvit Sumala, deputy director general of the Labour Ministry's Department of Labour Protection and Welfare, says that the government's 300-baht wage policy is aimed at improving workers' income and raising their purchasing power.

He admitted that the hike has pushed up the cost of production across the nation and that could dampen the competitiveness of some businesses.

Meanwhile, to survive, many business operators have attempted to manage their labour cost better by increasing work shifts to three from only two plus overtime in the past.

Previously when the daily wage stood at 215 baht a day, Mr Suvit explained, workers could earn more as there would normally be overtime payment since most employers arranged only two shifts at their factories.

"However when wages rose, most employers increased their shifts to three to avoid paying overtime. And that means workers now earn less," said Mr Suvit.

"Workers may see themselves losing some income now but the employers also need to do what they have to do to stay competitive and survive given that Thailand already has higher costs than neighbouring countries. So if we can adjust and pass this tough period our industrial structure will be improved," he said, adding that closures may be caused by disagreements between employers and workers.

"In some cases employers may not want to increase wages as they aren't ready but the workers disagree. So the factories have no other choice but to downsize or close down."

The wage hike, he continued, is good as it will surely improve the entire structure. "We just need to be patient," said Mr Suvit.

Competitiveness to be lifted

Even though the wage hike has been criticised by many parties, it is considered a necessity for good reasons. Most medium-sized to large companies believe it is one of prerequisites to boost the country's competitiveness.

Thiraphong Chansiri, the president of Thai Union of Frozen Products Plc (TUF), the world's biggest tuna producer, said the higher wage rate is needed as it promotes structural change of industries and raises the nation's competitiveness.

The wage hike drives business operators to adjust themselves through higher automation while increasing efficiency and productivity.

"If the country refuses to adjust and improve its industrial structures, then there won't be any advancement," said Mr Thiraphong. "Besides, it'll be strange if wages remain unchanged since we have a labour shortage problem."

Meanwhile, Mr Thiraphong said TUF has adjusted its pricing and increased productivity and efficiency through adopting a more fully automated system. "Compared to other countries, Thailand boasts solid strengths in quality of products and services. And that will keep customers with us," he said.

GFPT Plc, an SET-listed chicken producer and exporter, has complied with the new wage rate since it was initially applied in April 2012.

Jutamas Ingpochai, the vice-president for investor relations at GFPT, said the company usually raised wages by 4-5% annually and during the past two years has applied the new wage rate in accordance with government policy. This has forced it to speed up investment in technology and automation. During 2012-2013 it invested 300 million baht in machinery.

"The situation forced us to look at our production process and see how we can improve it. The goal is to increase output. So we must consider where to add more machines and where to use skilled labour.

"Whenever we invest in technology and machinery, I believe we start to accumulate our knowledge and know-how. In the long term, that will surely build up overall competitiveness," said Ms Jutamas.

Many SMEs have collapsed over the past two years, but the country's unemployment rate stood strong at 0.7% in 2013, one of the lowest in the world.

Labour specialists say there was a shift from the industrial to the agricultural and construction sectors in the past year due to SMEs closing down.

Mr Wallop from the FTI said that as many as 1 million workers have already shifted sectors. Ms Wilaiwan agrees, reasoning that superficially, some agricultural sectors generate good earnings.

"These include not only rice but also rubber, tapioca, sugar cane and palm oil. About 1 million workers have shifted to farming," said Mr Wallop.

However, there are concerns over this shift. All farming sectors are under the government's subsidy programmes while rice is now operated under the pledging scheme which has been widely criticised for its corruption loopholes and hefty losses. Some 1.42 million rice farmers are waiting to be paid by the government.

Hence, the question: what's next given that agriculture is still far from self-sustaining as it relies heavily on government subsidies? Or is this just another implication emphasising existing problems in the labour and agricultural sectors that will require more reasonable and sustainable solutions other than populism?

The recent cost-push inflation is another serious issue that must be addressed as it pulls down the purchasing power of consumers, particularly the grass roots. Many have seen an improved quality of life but are saddled with new and mounting debts.

KYIV: Two captured Russian soldiers pleaded guilty on Thursday to shelling a town in eastern Ukraine in the second war crimes trial of the war.

NEW DELHI: Hundreds of Indian air travellers were stranded inside their planes after the low-cost airline SpiceJet cancelled or delayed flights due to an "attempted ransomware attack", the company has said.