The government should abandon its non-welfare populist policies on the grounds that Thailand could fall further into the middle-income trap and face low productivity, says an economist. 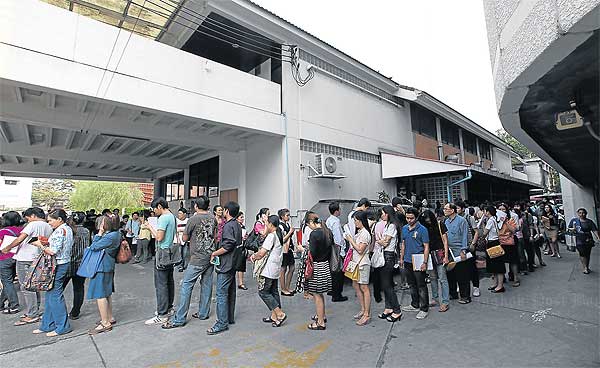 A late-2012 crowd queues up to claim a tax rebate from the government’s first-time car buyer scheme, one of several populist policies introduced by the Pheu Thailed government.

Addressing social welfare is important as part of economic reform and non-welfare policies, such as the the first-time car buyer scheme, should not be put into practice, said Veerathai Santiprabhob, an adviser of the Thailand Development Research Institute (TDRI).

He was speaking at a seminar titled "Challenges to the Thai Economy" hosted by Rangsit University's Institute of Diplomacy and International Studies.

Mr Veerathai said the 300-baht daily minimum wage is viewed as a marketing campaign rather than improving social welfare because provinces are different in terms of productivity, market access and types of business.

The rice-pledging scheme also demonstrates how the government intervenes in market mechanisms, resulting in loopholes for corruption and a greater public fiscal burden, he said.

"We have fallen into a populist policy trap because Thailand's post-1997 economic development resulted in much greater income inequality and these policies cannot emerge unless there is a wide income gap," Mr Veerathai said.

Weak democracy, a lack of skilful government technocrats and unregulated capitalism are factors perpetuating the existence of populist policies, he said, adding that these policies have changed the grassroots mentality from hard-working ethics to state dependency.

However, some populist policies are considered as good in their nature, notably the 30-baht universal healthcare scheme, village funds and free education, due to the intention of enhancing social welfare despite problems regarding the public fiscal burden and ineffective programme execution, he said.

Besides ending its non-welfare populist policies, the government should implement measures to enhance public service efficiency and competitiveness by cooperating with the private sector, said Mr Veerathai.

For example, the government should cooperate with private hospitals in developing an efficient social security programme and providing a variety of service providers to the public, as they are superior in terms of healthcare services and efficiency.

He said the move would also enhance the private sector's competitiveness and reduce the government's fiscal burden.

Mr Veerathai said the government should consider the possibility of adopting some of Malaysia's economic reform policies, such as social development programmes and benchmark tracking of ministerial performance, to push the country out of a middle-income trap.

Somchai Jitsuchon, a TDRI research director, said the effect of the government's populist policies depends on the nature and implementation of a particular policy.

The rice-pledging scheme is considered a bad populist policy because it has created a massive fiscal burden for the government and corruption, he said.

Meanwhile, village funds and the 300-baht minimum wage are considered neither good nor bad because they help minimise borrowing from loan sharks and income inequality but they still have implementation problems, said Mr Somchai.

He said the 30-baht healthcare scheme is considered a well-thought-out principle, as it addresses the basic necessities of the grass-roots population. The transparency of populist policies can be enhanced by greater public participation.