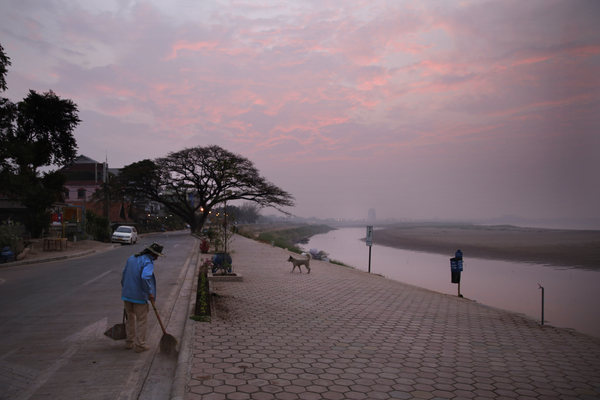 A municipal worker sweeps along a pathway near the Mekong River in Vientiane. The Lao capital is one the most popular places for Thai tourists. (AP photo)

The newspaper did not give the number of Thai tourists visiting the country in 2012 for comparison.

Tourists to Laos last year totalled 3.77 million, almost 400,000 more than the country projected. That figure has also broken the 2015 forecast of 3.7 million visitors.

Visitors from Asean, including Thailand, totalled 3.04 million last year, a jump from 2.7 million in 2012.

The figure also broke its 2015 forecast.

Tourists from other Asean member countries continue to make up the largest number of foreign visitors arriving in Laos compared to other regions, and the number is increasing constantly.

The most popular places for Thais are Vientiane, Savannakhet and Luang Prabang, according to the Thai embassy in Laos.