A new wave of small and medium-sized Japanese restaurant chains is setting a footprint in Thailand to tap the country's growing appetite for food from the Land of the Rising Sun. 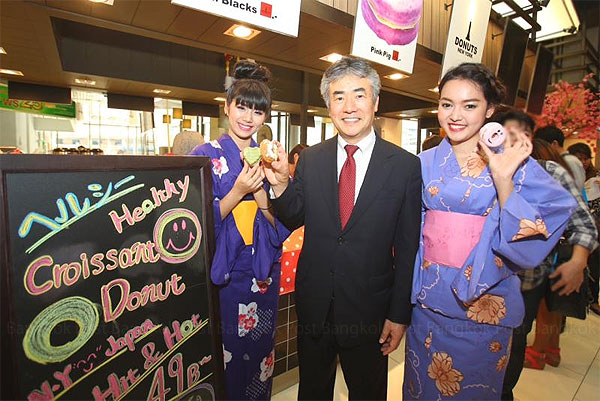 Japanese food is growing in popularity among the younger generation in Thailand, says Tatsuhiro Shindo, Jetro’s director-general for creative industries.

The newcomers are joining many established market players.

They are now showing their dishes at the “Discover New Tastes for Japan: Enjoy 7 Delicious Japanese Hotspots” event at Gateway Ekamai until March 23. The event is arranged by the Japan External Trade Organization (Jetro).

Todai Ramen and the Tenjin udon restaurant chain plan to make their debuts in Thailand next year while Kinshiro is seeking Thai partners during this fair.

A Miguen executive said the company will seek more opportunities for its soba noodle restaurant outside Japan because beef consumption in Japan is declining year-by-year while the price of beef continues to rise.

Cup'n Roll has been in talks with 30 Thai companies to jointly operate sushi restaurants in Thailand.

Kaoru Imai, president of Pantes Co, the operator of Croissant Donut New York, said the company has formed a joint venture with a Thai partner and plans to open its first outlet in Bangkok in the fourth quarter of this year.

In addition to Thailand, the company has also been talking to potential investors in China, Cambodia and the Philippines about opening outlets in those countries.

Apart from small and medium Japanese restaurants, the Matsuya brand, which has over 1,000 branches in Japan will also plan to bring its Japanese kitchen to Bangkok with its signature gyudon or Japanese beef bowl.

Tenjin, an award-winning Udon restaurant from Yokohama, claimed its Tsihama horumun udon was awarded the Silver Grand Prix at the 4th B-1 Grand Prix, which is an annual B-kyu Gotochi Gurume Festival held since 2006.

Tatsuhiro Shindo, director-general for creative industries promotion department at Jetro, said there is growing fondness and popularity for Japanese food especially among the younger generation of Thais as Japanese food is convenient and healthy.

Currently, there are more than 1,800 Japanese restaurants in Thailand.

Jetro said that the opportunity is ripe for more Japanese establishments in the country to cater the growing base of Thais and Japanese expatriates seeking Japanese food.