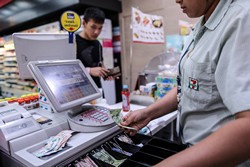 An employee counts banknotes at a cash register while processing a customer's payment inside a 7-Eleven convenience store on Wednesday. (Photo by Bloomberg)

Thailand's credit fundamentals have "withstood the political turbulence in the country since the September 2006 coup", said the ratings agency in the statement released today.

The stable outlook reflects the expectation that the political turmoil will not undermine Thailand's credit strengths to a material degree.

It lists among the key strengths favourable government debt structure, prudent monetary and macroeconomic policy as well as fiscal management.

"Moody's does not expect the recent political developments to have a significant impact on Thailand's medium-term growth outlook, which remains favourable when compared to similar-rated peers," it said.

While anti-government protests will keep real GDP growth in 2014 at around 3%, assuming a return to normalcy in the second half, the rating agency sees growth picking up again from 2015 onwards to average 4.5% through to 2018 from 2014. This compares to projected average median growth rates of 3.7% for the Baa-rated peer group and 3.4% for A-rated peers.

However, it warns a prolonged political deadlock into the second half of 2014 will affect a negative outlook rating, as will the escalation or proliferation of the rallies. Other negative factors include a significant rise in government funding costs related to domestic political uncertainty or a lapse in fiscal discipline and a sharp deterioration of the balance of payments and significant loss of official international reserves.

DUBLIN: Millions of people in Ireland were getting set for a second national lockdown on Wednesday, the first European country to take the drastic step as the continent battles a persistent surge in coronavirus cases.

LAGOS: Buildings in Nigeria's main city of Lagos were torched on Wednesday and sporadic clashes erupted after the shooting of peaceful protesters in which Amnesty International said security forces had killed several people.