Areas around Kuala Lumpur started water rationing this month. Neighbouring Singapore, which had a record 27 days without rain from Jan 13, is preparing for the dry spell to persist into the first half of March.

In Indonesia's Riau province, officials declared a state of emergency as forest fires blanketed the region in haze.

The drought's fallout may escalate to slower economic growth from just "discomfort" if it continues next month, Malaysia’s international trade minister said on Friday.

The price of palm oil, one of Southeast Asia's most important crops, is surging as the weather hampers production. 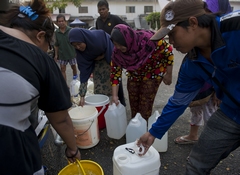 People queue to collect water from a tank in Balakong, outside Kuala Lumpur. (AFP Photo)

"The impact will be on growth and inflation," said Wai Ho Leong, the Singapore-based senior regional economist at Barclays who predicts higher prices may hurt consumers in the region.

"The rise in vegetable and cooking oil prices will add to inflation concerns in Malaysia, which is already trying to contain a jump in inflation expectations."

Malaysian inflation accelerated to a two-year high of 3.4% in January, more than the median estimate of economists for a reading of 3.3%, according to a Feb 19 report.

Singapore's consumer prices rose 1.4% from a year earlier while inflation in Indonesia was 8.22%.

Southeast Asia is under the influence of the Northeast Monsoon, which brings dry and stable air from the South China Sea and lessens the likelihood of rainfall, said Winston Chow, an assistant professor of geography at the National University of Singapore.

"February is the driest month for Singapore," Chow said. "What’s not normal is the length of the dry spell."

The countries join Australia, Brazil, Kosovo and parts of Thailand and the United States as among those battling drought.

California Governor Jerry Brown declared a state of emergency after 2013 became the driest on record. Most farmers in California's Central Valley, the world's most productive agricultural region, will get none of the water they requested this year from a federally controlled system due to the drought, the US government said this month. 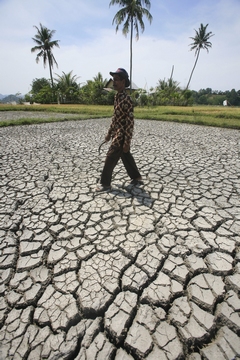 With agriculture accounting for less than 8% of Malaysia's economy, the government is sticking to its forecast for 5% growth this year, Mustapa Mohamed, the trade and industry minister, said in an interview. Should the drought last through March, "agriculture could be affected", he admitted.

Malaysia and Indonesia account for 86% of oil palm output, according to the US Agriculture Department. Futures may advance to 3,000 ringgit ($915) a tonne within four months, the highest price since 2012, said Coleman, who helps to manage the $143-million Merchant Commodity Fund from Singapore. The price settled at 2,779 ringgit on Friday.

Dry weather may limit Indonesia's increase in palm production in the first half, said Martua Sitorus, the executive deputy chairman at Wilmar International, on Feb 21. The Singapore-based company is the largest palm oil processor.

In Malaysia, the government is preparing funding to help Selangor state nationalise water assets in the region surrounding the capital. Water rationing began in parts of Selangor this week after the drought drained reservoirs, and will extend to 431,617 households, The Star reported on its website, citing Malaysia's water services commission.

"The supply of raw water in Selangor state is in a critical condition," said Khalid Ibrahim, the chief minister of Selangor state. "The water levels at a few dams have been shrinking to reach an alarming stage."

Malaysia supplies water to Singapore, which consumes about 1.8 billion litres a day. The city-state gets about 60% of its water from the Malaysian state of Johor and draws on local reservoirs and streams.

Singapore plans to triple its wastewater recycling and increase desalination capacity almost tenfold to meet as much as 80% of water demand in 2060.

The push to develop the industry has drawn businesses including General Electric and Siemens to invest, and created local water companies such as Hyflux Ltd.

In Thailand, Khon Kaen has growing water shortages as supplies drop in dams and rivers, with the most recent rainfall in the northeastern province in December, the National News Bureau said.

Farmers in the area have been urged by the Royal Irrigation Department to help by stopping any off-season rice growing, according to NNT.

In Riau, the second-biggest province on Sumatra, an emergency was declared through March 12 because of smoke from fires, said Sutopo Purwo Nugroho, a spokesman at Indonesia's disaster management agency. Extinguishing the fires will require water bombing, according to local officials.

Satellite images showed 11 fire hot spots in Riau on Feb 24 compared with as many as 243 on Feb 11, according to Indonesia’s Forestry Ministry.

"It's very likely that the lack of rain so far does promote conditions in which these hot spots can form," said Chow at National University of Singapore.

Disputes over haze flare up regularly between Indonesia, Malaysia and Singapore. The latest was in June, when smog in Singapore reached a record because of Indonesian forest fires.
While the drought is blamed for forest fires in Riau province, other parts of the country are grappling with floods.

Some western parts of Sulawesi island, the country's main cocoa-growing region, got as much as 38 centimetres of rain this month. That’s about two to three times normal and excess moisture is increasing the risk of crop diseases.

Coffee shipments from Indonesia may decline 17% this year to the lowest since 2011 as rain cuts output. Sales may drop to 375,000 tonnes from 450,000 tonnes in 2013, according to the median of five estimates compiled by Bloomberg from exporters and roasters. That's the lowest in three years, Central Statistics Agency data show.