A bid by Airports of Thailand (AoT) to increase airport departure taxes has been stalled by the political conflict but counter check-in fees will go up anyway, by five baht. 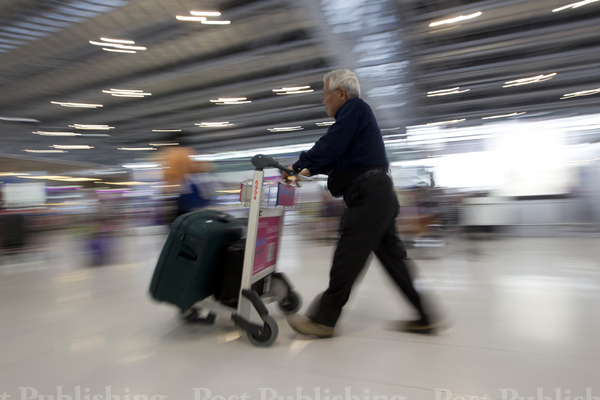 A passenger rushes to check in at Suvarnabhumi Airport. The counter check-in fee will rise from 25 to 30 baht from May 1. (Bloomberg photo)

Department of Civil Aviation chief Woradej Harnprasert said it was unlikely the planned departure tax increase woud be approved  soon. There there had been no meetings called on the issue by the Civil Aviation Committee (CAC). This was because of the absence of political direction, because of the current conflict.

The new airport tax increase needs approval from the committee, and then from the transport minister.

"The airport passenger tax increase is a policy issue which needs consultation and agreement from the CAC first, before final approval from the transport minister.

The CAC is a screening body. But no meetings have been arranged because of the status of the government as a caretaker government," he said.

AoT has pushed for airport departure taxes to be increased -  a doubling of the domestic pasenger service tax from 100 baht to 200 baht, and an increase in the international passenger departure tax from 700 to 800 baht - since July last year.

An AoT official said the present charge for domestic travellers is below cost, which is now about 336 baht per passenger. The cost for international flights, however, remains at 500 baht, the official admitted.

AoT president Makin Petplai said the agency had already submitted reasons for the increase to the CAC,  but   committee has not seen the proposal.

Even as the airport service tax remains unchanged, for now, the counter check-in fee will rise from May 1.

The fee is automatically included in the airline ticket.

Suvarnabhumi general manager Rawewan Netrakavesna defended the increase, saying that the airports have not increased charges for a long time.

ATHENS: Greece's government has cautiously welcomed a plan from Brussels to reform the EU's shaky asylum system, but charity groups working with refugees on the ground have blasted a continued "outrageous containment policy".