Koh Chang in Trat province will be promoted as the first climate-friendly tourism destination in Asean when the Asean Economic Community takes effect at the end of 2015, says the Designated Areas for Sustainable Tourism Administration (Dasta). 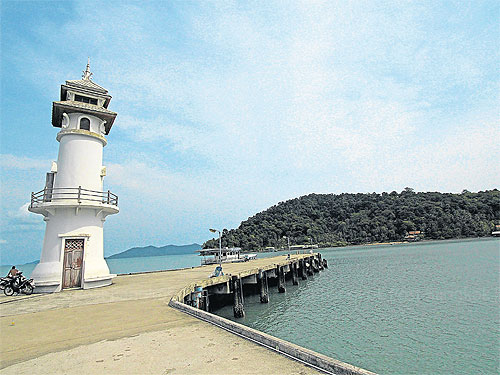 A view of the lighthouse on Koh Chang, which will attempt to become the first climate-friendly tourism destination in Asean.

Dasta in collaboration with Deutsche Gesellschaft für Internationale Zusammenarbeit (GIZ) hopes to change the image of Koh Chang and its vicinity from a general tourism site to a low-carbon destination, said director-general Nalikatibhag Sangsnit.

Many tourists, especially Europeans, prefer to travel to climate-friendly tourism sites. Both Dasta and GIZ saw the potential of the Koh Chang cluster, including Koh Mak and Koh Kood, to be a low-carbon tourism destination.

The cluster comprises 10% mainland area while the marine area covers the three main islands and 49 smaller ones. The total area is 4,280 square metres, divided into 15 local administration units under six districts. It is located in Trat province, close to Cambodia.

In 2009, GIZ revealed the average distribution of CO2 emissions was 19.74 kilogrammes per tourist per day.

Dasta and GIZ introduced several CO2-reducing activities for the communities and tourism operators in the cluster, including community-based solid waste management, training in the tourism sector about climate change, energy and resource efficiency, and organic production.

The travel and tourism sector is committed to emissions reductions, as the air transport cluster forecast a 25% improvement in fleet fuel efficiency by 2020.

Although the hospitality sector is growing rapidly in the Middle East, its share of emissions are projected to remain tiny (roughly 5%). North America and Europe will together contribute about 50% of global accommodation emissions in 2035, down by 10% compared to 2005.

Apart from Koh Chang, Dasta plans to promote other destinations such as Pattaya, Sukhothai and Kamphaeng Phet Historical Parks, Loei, Nan, and U Thong ancient city, to be climate-friendly tourism destinations.