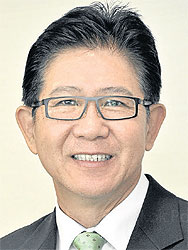 Although Bangchak set a milestone of 50% earning before interest tax depreciation and amortisation (EBITDA) from new businesses in 2020, mostly in renewable energy ventures, the company has yet to decide the new core stream of revenue.

"The new business' EBITDA stood at 22% since the end of last year and will reach 30% this year," said president Vichien Usanachote.

Since the last decade the new business has set a goal to be a green refiner, focusing on ethanol refining and bio-fuel plants, solar energy, mining and a few more new businesses.

"This year we have been talking to several potential partners. I think we can launch at least one business this year," said Mr Vichien.

He said even though it has extended business beyond energy, it is still too early for Bangchak to decide whether it should seek out a new key source of revenue as all of them do not generate much money for the company targeting 25 billion baht EBITDA this year — nearly a 10% rise from last year.

"Only potash mining has great potential to generate high revenue," said Mr Vichien, adding that since potash is a raw material for producing fertiliser it sees the chance to distribute locally made fertiliser through the cooperative-run petrol station network countrywide.

It is still in the process of conducting an environmental impact assessment report but it is quite difficult to overcome the strong opposition from the local community in Chaiyaphum where potash is mined.

"We will be visiting the mine in the UK to see if mining technology can solve the environmental problems," said Mr Vichien.

It is expecting an annual output of 1 million tonnes of potash from its mining venture. About 10 to 12 billion baht will be invested in the potash mine.

The company earmarked an annual budget of 5 billion baht to invest in renewable energy businesses. However, this will depend on the size of each investment and its ability to borrow.

"Although fossil fuels will remain the major type of fuel globally over the next five to 10 years, their use will gradually decline due to a variety of factors relating to the environment. The emergence of green energy will mark the death toll for fossil fuels," said Mr Vichien.

Two of the company's 175-megawatt solar farms went into operation late last year. Mr Vichien said the remainder are projected to be operating within the end of the year.

"If our third-phase solar farm operates this year as planned, our EBITDA will reach 30% including new businesses," said Mr Vichien.

In addition, the company has started to invest in ethanol makers to support demand for the fuel. It is looking to acquire ethanol refineries to secure a feed supply as its gasohol refining unit requires around 800,000 litres a day.

Bangchak is seeking a potential partner with high efficiency in cassava-based ethanol production, as this sector still has room to grow compared to molasses, which has limited supply in line with sugar production.

"It is likely to have an output of 200,000 to 300,000 litres daily with around 1 billion baht investment. We want to secure around 50% of our demand," Mr Vichien said, adding Bangchak talked to two companies about ethanol deals.

Bangchak's policy is to join new ventures as partners rather than takeover new deals as it has no experience in human resources to beat competitors in areas it is not familiar with.

For example, the highest potential comes from a proposal from Oriental Sun for a share in a 50-MW solar farm venture, with two other partners, a Thai group and a Japanese firm.

Japan's solar fuel market has reached the saturation point as a lot of operators are holding licences with incentives from the government, but instead of investing themselves, they are looking for foreign partners eligible for a 10% lower corporate tax.

"Our advantage is at least a 20-year power purchasing agreement with one of 10 prefectures in Japan and knowledge of how to co-exist within the community," said Mr Vichien.

It is also interested in being an exclusive distributor and installer of rooftop solar panels in residential and small buildings once the government sets a clear direction promoting solar energy.

"Once our efficiency improvement programme at the refinery is completed, we will earn a higher EBITDA of 3 billion baht per year," said Mr Vichien.

Shares of BCP closed yesterday on the Stock Exchange of Thailand at 30.50 baht, down one baht, in trade worth 147 million baht.