The SET-listed Pace Development Corporation has raised the sale prices of its MahaNakhon development, expected to be the country's tallest building, after changing property ownership of the plot from leasehold to freehold. 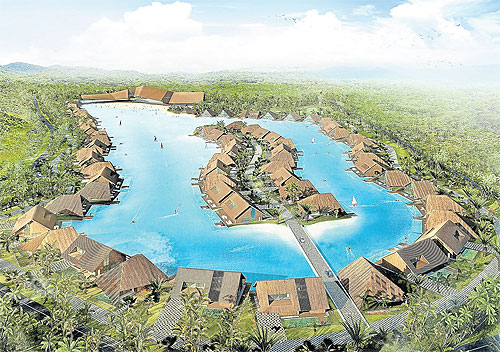 "The change in land ownership rights will increase the project's attractiveness to ultra-rich foreign buyers," said chief executive Sorapoj Techakraisri, adding that prices would increase by at least 12% from the original price of 250,000 a square metre.

Pace expects a four-percentage-point increase in gross margin to 36%.

Mr Sorapoj said it plans to introduce the project in London and Moscow early next year after holding roadshows in Dubai, Hong Kong and Singapore in recent years.

Located near Chong Nonsi skytrain station, the 314-metre-high MahaNakhon will comprise 200 luxury condo units branded under The Ritz-Carlton Residences Bangkok, the Bangkok Edition Hotel, with 159 rooms and the lifestyle mall Cube with a lettable area of 5,200 square metres.

The land acquisition increases the project value to 21 billion baht from 19 billion, as condo sales prices are hiked 12-15%.

Some 60% of units are booked, and 75% of those units agreed to pay more to change from leasehold to freehold. The rest are pending consideration.

"If customers who bought leasehold units don't want to change, they can still lease with us," Mr Sorapoj said.

As the 159 hotel rooms the company will own are part of the project, the maximum foreign ownership quota can be up to 84% of the 200 condo units for sale. Of the sold units, 60% were bought by foreigners, mainly from Hong Kong and Singapore.

Project construction is scheduled for completion by late 2015 and unit transfers will spill over to 2016.

This year Pace expects 200 million baht in revenue and 300 million in expenses as it waits for MahaNakhon to be built.

Revenue in 2014 will be from sales of remaining units at two condo projects — Ficus Lane and Saladaeng Residences — and some 50 million baht from rents at Cube in the second quarter and sales at MahaSamutr in Hua Hin.