Udon Thani wants on the map

The Udon Thani Tourism Business Association has set an ambitious goal of placing the northeastern province on the global tourism map. 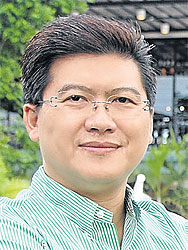 He said in the near future, the number of flights between Bangkok to Udon Thani will increase to 27 per day, ranking as the third highest destination from Bangkok after Phuket and Chiang Mai.

More flights from Singapore, Vietnam and China are planned as well, he said.

Mr Tanakorn said the province can be a transit hub for travellers heading to other destinations, bypassing Bangkok as it is often busy with political conflicts.

The province is also improving facilities, increasing its hotel rooms to 6,000 and building a giant retail complex.

Udon Thani is located in a strategic location, with easy access to Laos and further connections to Vietnam, which is expected to provide multiple tourism opportunities after the integration of the Asean Economic Community (AEC) late next year.

The number of visitors may double to 4 million in two years, while foreign visitors should grow because of the formation of the AEC.

To achieve its goal, Mr Tanakorn said the association will launch measures to attract more tourists, such as promoting tourism destinations.

It also plans to promote a World Heritage Site "triangle", encouraging travel from Ban Chiang in Udon Thani to Luang Prabang in Laos and ending at Halong Bay in Vietnam.

The association signed a memorandum of understanding with the Tourism Authority of Thailand’s Udon Thani office and Udon Thani Chamber of Commerce to support this triangle travel scheme.

The goal of the programme is to promote tourism regionally when the AEC kicks off at the end of 2015.

Moreover, during his two-year term at the association, Mr Tanakorn will promote Udon Thani internationally by attending tourism fairs in cooperation with the Tourism Authority of Thailand.

Visiting travel fairs has been a successful ploy for administrators promoting Pattaya and Phuket abroad.