Myanmar’s government is preparing to allow foreign banks to operate independently within the country before the end of the year. Already a “fast track” process for the selection of up to 10 banks has begun, according to sources in Myanmar’s Central Bank. But there is already resistance from local banks. 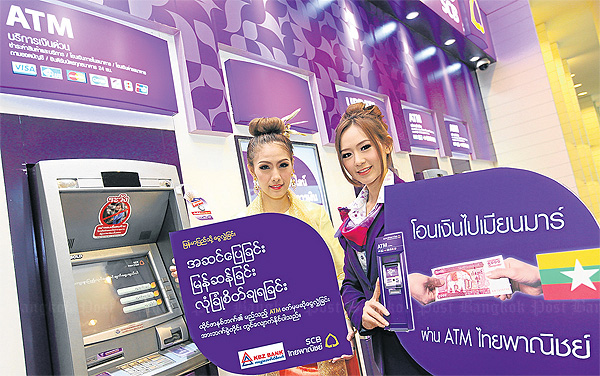 Siam Commercial Bank is among the Thai financial institutions with a presence in Myanmar.

“These banks are very nervous about the prospect of foreign banks, which have more expertise and better access to capital, coming to Myanmar to do retail banking, fearing they’d put a number of local banks out of business,” said Jared Bissinger, a researcher in development economics based in Yangon.

The plan is to give licences to around 10 international banks, according to sources close to the process. The aim is to have them operational by the end of the year – though the sooner the better. They are to be “wholesale lenders to Myanmar banks” and be able to lend to foreign companies operating in the country.

It is crucial for these banks to be able to lend in kyat, said Sean Turnell, a specialist in Myanmar’s banks based at Macquarie University in Australia.

“Large foreign investors – one of their main customers – at present are significantly exposed to foreign-exchange risk – raising capital offshore for investment in Myanmar, in foreign exchange, but generating sales and profits in kyat. Should there be a great movement in the kyat exchange rate, they are then potentially exposed to catastrophic loss.”

Since the currency was floated three years ago the kyat has depreciated by nearly 20% against the dollar – from 820 to around 980. But while the foreign banks are not able to accept kyat deposits, they will still be subject to currency fluctuations.

“All in all, the risks for foreign banks in Myanmar are rather greater than what might be hoped for, and the returns likely to be smaller and more volatile,” Prof Turnell told Asia Focus in an interview.

The main impetus for this seems to be the start of Asean Economic Community (AEC) at the end of 2015 coupled with Japanese government “pressure”. President Thein Sein is fully behind this move and sees it as crucial to his plans for development and the economic reform process.

“Allowing foreign banks entry is absolutely critical to the broader reform process. Foreign investors routinely claim that the lack of banking services is one of the main factors that hold them back — from entering the Myanmar market at all, or from expanding beyond a mere exploratory base,” said Prof Turnell.

“No country has achieved transformational growth without a functioning banking system to expand and attract capital. Foreign bank entry potentially allows Myanmar to achieve catch-up to this end,” he added.

Now the government is preparing to dip into the international banking business – though because of pressure from local banks and businesses, it would restrict it to a maximum of 10 banks.

The International Money Fund (IMF) said that allowing international banks in is an important part of developing Myanmar’s financial sector – though it also advised that this should not be rushed. The IMF has continued to work with the central bank and has been instrumental in drawing up criteria that will be used to choose the foreign banks that want to bid for the handful of licences that will be available.

The central bank is in charge of the process of granting the licences. An independent consultant company is to oversee the bidding process. It will set the terms of reference and vet the bids when they are tabled, much like the role of Roland Berger during the telecoms bidding last year, according to an economic adviser to the government. Four international companies have been asked to bid for that position, and the outcome is expected by the end of April at the latest.

A selection committee will be formed – much like the one that ran the telecoms bidding process. Tenders will then be called from foreign banks, with the successful candidates announced by the end of May, according to a source close to the central bank.

“It has to be a clean and transparent process, like telecoms,” said a government insider. “Only then can we convince the international community that this government stands for real economic change – the old way of doing things is gone forever.”

The main worry at present is the growing protectionist demands from Myanmar businesses.

“Right now there’s a growing concern among local businesses — especially small and medium enterprises — about increased competition from foreign companies, especially because of the Asean Economic Community coming in 2015,” said Bissinger, a development economics specialist based in Yangon.

Even the central bank has taken up the cudgels. The governor and most of the board, according to sources close to the bank, is opposed to foreigners working in local Myanmar banks and has tried to get them ousted. For the moment they are not allowed to work in senior management in local banks, and prohibited from being the CEO or general manager.

But the introduction of foreign banks into Myanmar is a win-win situation, according to Prof Turnell. “The arrival of foreign banks will have a positive impact on local banks,” he said, though the former will cater to an entirely different market — primarily foreign investors but potentially others wanting services the local banks cannot yet provide.

“Ultimately this is in the interests of the local banks in the longer term. Foreign banks will bring in new technologies and methodologies that can be replicated, will train staff that might ultimately become the cohort of local bank leaders and so on,” he concluded.

Some 35 international banks already have representative offices in Myanmar, including most major Thai banks.

Thailand is at risk of being fined by the organiser of the World Expo if it fails to pay an additional expense of 12.4 million baht incurred from a one-year delay.

Deputy Prime Minister Prawit Wongsuwon has ordered all relevant state agencies to prepare for major downpours across 22 provinces which may trigger flash floods and landslides.

Thai tourism this year is likely to be at an all-time low as international arrivals may reach just 1 million.