After a career as India’s highest-ranking female police officer, Kiran Bedi is still busy crusading on behalf of people who often are neglected.

One might think that blazing a trail as the first woman in the Indian Police Service (IPS) and later as its highest-ranking female officer, winning numerous national and international awards along the way, would be a very satisfying career to look back on. 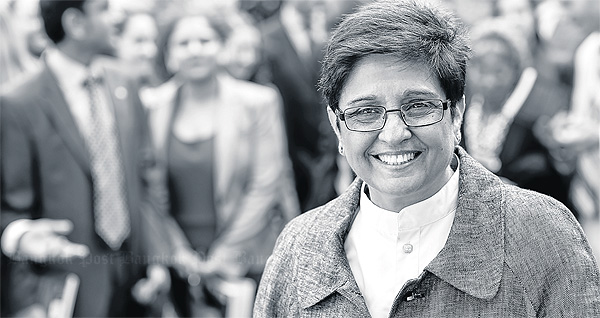 “My home is a charging station, the oasis for values and discipline, character building, peace, knowledge and lots of love”

But Kiran Bedi has never been one for looking back – “You can’t live on yesterday,” she says. In the seven years since she retired from the IPS to pursue her other interests in social activism, she has been busier than ever. She will turn 65 in June this year and shows no sign of slowing down.

Born into a happy and warm-hearted family in Amritsar in Punjab, Bedi was the second of four daughters of parents who encouraged girls to pursue their dreams and helped make her the way she is today.

“My home is a charging station, the oasis for values and discipline, character building, peace, knowledge and lots of love,” she says.

Culturally, not all Indian families provide opportunities for their daughters to study. Some of Bedi’s friends were told that after they graduated from school, they would have to get married. This never happened in her family.

“When I look back on my family, I realise that this makes me different from others,” she told Asia Focus. “The way my family treated me has had a 100% influence on me and made me who I am today.”

Bedi graduated her bachelor’s degree in English from the Government College for Women in Amritsar, and earned a master’s degree in Political Science from Punjab University. She pursued her love of studying further, obtaining a Law Degree from Delhi University and a doctorate in Social Sciences from the Indian Institute of Technology in New Delhi. Her research topic for the PhD was Drug Abuse and Domestic Violence.

She started her working life in 1970 as a lecturer at Khalsa College for Women in Amritsar. Two years later, she joined the IPS, where she spent most of her career and made her reputation.

At the IPS, Bedi experienced great variety in terms of responsibilities as well as challenges. Her assignments included Traffic Commissioner of New Delhi, Deputy Inspector-general in the insurgency-prone northeastern area of Mizoram, Lieutenant-governor of Chandigarh and Director-general of the Narcotics Control Bureau.

“Being a (woman) police officer is not difficult, but challenges are around you,” she says. “Lots of people keep challenging you. “So, the best way I respond is to apply my energy and think about who I’m responsible for.” 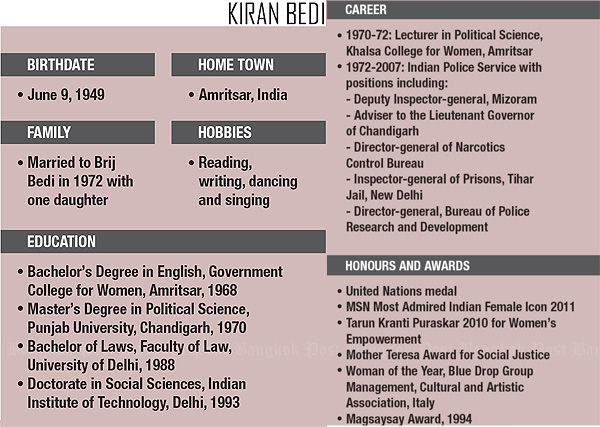 Bedi spent 25 years as a police officer. The work exposed her to training in how to be a complete police professional, learning about law, investigation techniques and forensics from the police school. But there are other qualities that make a successful police officer. These include integrity, compassion, discipline and simplicity. “Those qualifications are already with me,” she says. “Learning to be a police professional is always good. So, when both come together, it’s a good combination.”

Bedi worked very hard when she was with the IPS. She made some major and lasting contributions in areas including traffic management, narcotics control and VIP security.

When she was the inspector-general of Tihar Jail, Bedi brought about several reforms in the way the prisons are managed. She spearheaded detoxification programmes, yoga, vipassana meditation, redress of complaints by prisoners, and literacy programmes.

Her initiatives for the practice of Vipassana meditation were documented in the film Doing Time, Doing Vipassana. For this she won the 1994 Ramon Magsaysay Award.

Bedi’s highest title in the IPS was as Director-general of the Bureau of Police Research and Development. She admitted that the job took most of her time, but she always managed her time wisely to make sure that her family was well looked after.

Bedi married Brij Bedi in 1972, the year she started her career in the IPS. She had daughter Saina in 1975.

Because her work was so demanding, Bedi concluded that it would be better to spend money for things that she felt comfortable letting others do, such as cleaning the house or taking care of her child and walking her to school, so that she could be available for her job and free of any concerns.

“It’s about budgeting my time and managing energy carefully. I will do things that only I can do and I don’t do what others can do for me,” she explains. “I’ve never cooked and cleaned for my husband. If somebody can clean my house, drive for me and let me read smoothly in the car, I will let them do it. I pay a lot for these services. That’s my nature.

“For my daughter, if somebody else can feed her or walk her to school, I will let that person do it. But when it comes to passing on love and hugs, others can’t do that, but I can.”

Spending time wisely and saving her energy to do what she loves to do, including anything that she feels will benefit society, leaves little time for frivolity. It means that sometimes Bedi will not socialise with others. She does not like gossiping as “it drains my energy sometimes”.

After being with the police for 25 years, Bedi decided to voluntarily retire in 2007. After her retirement, she set up a website, www.saferindia.com, aimed at helping people whose complaints are ignored by the police. Since then, she has dedicated her retirement life for helping the Indian people.

Along with 15 other police officers she set up Navjyoti India Foundation (NIF) in 1987. It began with a focus on rehabilitating drug addicts and has since to other areas such as literacy and women’s empowerment. In 1994 Bedi set up the India Vision Foundation which works on police and prison reforms, women’s empowerment and rural and community development.

Asked to define herself in a few words, she is happy to say that she is a person who has grown up to give. “The more I give, the more I get,” she says.

“It’s not selfish living. It’s not walking away. But it’s walking with a high purpose. Over the next 10 years, I will continue to give as much as I can. Every day is giving; otherwise, it will be a waste.”

The efforts and dedication Bedi has devoted to her home country have led to many honours. Among them, the Ramon Magsaysay award makes her the proudest.

Away from her many activities, Bedi has enjoyed seeing her daughter grow up, marry and have a child. She still reads and writes, and despite her busy schedule she tries to ensure that she can preserve her energy.

“I entertain myself by reading, dancing and singing. And I don’t sacrifice my sleep. Despite hard work, I sleep tight for seven hours per night.”

She attributes her success to her habits, saying that some she had to cultivate while others seemed to have always been part of her. Good habits and positive thinking help her to do whatever she sets out to achieve.

“It’s life itself that drives me. Every day you get a new day. You can’t live on yesterday. So, I plan my schedule. What I plan to do tomorrow, it’s about tomorrow. Let me do today what is today,” she says.

“In terms of my way of thinking, I will have 90% positive thinking and leave just 10% for negativity. When anything comes up in my life, my 90% positive view will not let the 10% negative thinking rise up. This is the way I am.”