Amparwon Pichalai, advisor to the Commerce Ministry, said on Tuesday that the CPI for last month was up 2.11% on the same month last year and 0.22% month-on-month to stand at 106.94 points. 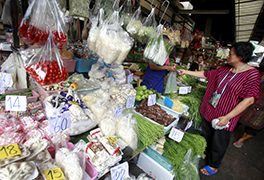 Meanwhile, the Asian Development Bank (ADB) forecast that the Thai economy would grow only 2.9 % this year and could fare worse if no "fully functional government" is in place by the second semester.

Luxmon Attapich, ADB's senior economist, said five months of anti-government protests in Bangkok and the failure to set up a new government have taken a toll on the consumer and tourism sectors, prompting the ADB to slash its previous forecast of 4.5% to 5% growth for 2014.

"What will happen is consumer confidence will continue to drop, investors will take a wait-and-see stance and the government budget for fiscal 2015 will not be there, so investments will not happen," Ms Luxman said at the Bangkok launch of the bank's Asian Development Outlook report.

The caretaker government needs to be in place to approve the annual budget by the October 1 beginning of the fiscal year.

The ADB warned that economic growth will be lower than 2.9% if a new administration is not in place by then.

Caretaker Prime Minister Yingluck Shinawtara called a snap election on Feb 2, but the results were annulled by the Constitutional Court on March 21 due to disruptions of registration and voting.

A new elections date has not been set, and there are doubts that one can be held soon because protesters are determined to keep Ms Yingluck and her brother, fugitive former premier Thaksin Shinawatra, from power.

The demonstrators want a "neutral" prime minister to be appointed to implement political reforms before the next election.

Thailand's economy grew an estimated 2.9% last year, according to the ADB.

"Growth in fourth quarter, when political unrest intensified, decelerated to 0.6% year on year," the report said.