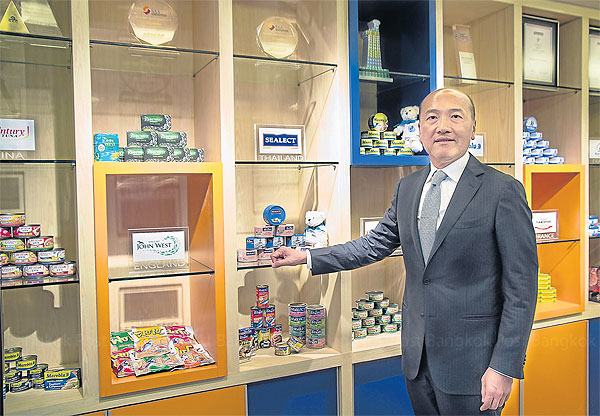 President and chief executive Thiraphong Chansiri said the company has considered expanding in South America, where purchasing power is higher than in Asean.

"As of now, consumption is growing there, spurred by economic growth in the region," he told reporters yesterday. "We are looking for further opportunity to widen our business there, probably by teaming up with business partners in the near future."

South America accounts for just 1% of TUF's overall revenue, with 42% coming from the US, 30% from Europe, 7% each from Japan and Thailand and 4% from other markets.

But the situation will most likely improve in the second half on developments in the US, Europe and Japan.

The US and European economies have shown improvement, and TUF expects healthier sales and margins in those markets.

This year, total shrimp supply is forecast at nearly 300,000 tonnes.

"The EMS spread is likely to ease in the second half of 2014," Mr Thiraphong said.

By focusing on cost control, TUF hopes to maintain sales and administrative expenses at 9% of revenue.

To drive growth, Mr Thiraphong said TUF is always on the lookout for potential mergers and acquisitions. Nothing is concrete at this stage.

In addition, organic business growth is driven by product innovation and market expansion.

The company has outlined a strategic direction for 2014 that will transform TUF into a truly worldwide company with a global structure.

Each year, TUF will invest 150 million baht in research and development. A three-year plan has been laid out to make tuna a global product.

The world's biggest maker of shelf-stable tuna products employs a global workforce of more than 32,000.

Shares of TUF closed yesterday on the Stock Exchange of Thailand at 68.75 baht, up 25 satang, in trade worth 66.37 million baht.