Asian rice prices will keep slumping from a near six-year low as Thailand clears out record stockpiles, threatening a price war with Vietnam and India. 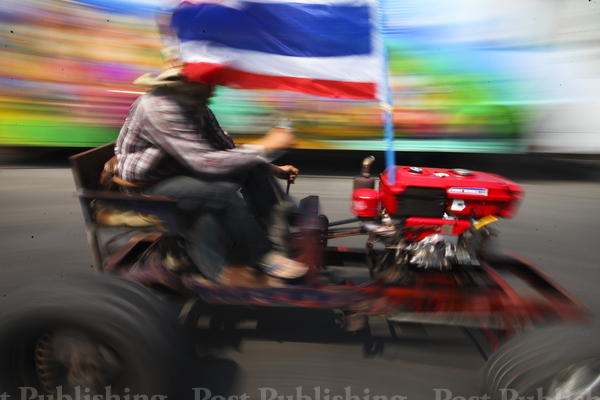 A farmer drives an e-tan in a rally to press the caretaker government to pay them money from the rice-pledging scheme. Thailand plans to dump rice from stockpiles to the world market. (Photo by Patipat Janthong)

The government plans to sell about 1 million tonnes a month, compared with average monthly exports of 558,000 tonnes last year. The nation's benchmark price, which is already below cost in Vietnam and India, may retreat US$11 (352 baht) to $350 (11,375 baht) a tonne by May, the Thai Rice Exporters Association forecasts.

Thailand accumulated reserves under a state-buying programme which ended this year amid a political crisis. Its stockpiles reached 12.8 million tonnes in 2013, or about one-third of the global export market. Vietnam's minister of industry and trade said this week that Thailand was willing to sell the grain at any price.

Cheaper rice may contribute to lower food costs, helping to damp inflation across Asia, where billions depend on the staple. Global food prices tracked by the United Nations fell 2.1% in the past year. Thailand, India and Vietnam, the three biggest shippers, accounted for 62% of the rice trade last year, the US Department of Agriculture (USDA) estimates. Rice is falling as wheat in Chicago rose 11% this year.

Thailand is short of funds to pay farmers under the now-ended programme, which is the target of an anti-corruption probe. The country's reserves more than doubled from 5.6 million tonnes in 2011, when the intervention began under the Pheu Thai Party administration, to 14.7 million tonnes this year, USDA data show. The programme, which paid farmers above-market rates for their crop, was designed to lift rural incomes.

While stockpile sales increase, dry weather in Thailand may curb harvests this year just as farmers adjust to the absence of guaranteed prices. The so-called minor crop, which runs to October, may contract 5% to 10.2 million tonnes, the Office of Agricultural Economics forecast March 25.

''We will see heightened competition in the market because Thailand is quite eager to release the stockpiles,'' said Darren Cooper, a senior economist at the London-based International Grains Council. ''Thai prices have been falling steadily for the past year. We have seen some acceleration in the past few weeks, when it became clearer that Thailand needs to offload stocks to generate funds.''

The Philippines, Asia's largest buyer this year after China and Indonesia, will hold a tender for 800,000 tonnes on April 15. While Thailand will offer the full amount, it's concerned the sale is taking place as crops from Vietnam are coming onto the market and hurting prices, according to Surasak Riangkrul, director-general of the Department of Foreign Trade.

''Thailand is willing to agree to sales at any price,'' Vietnam's Minister of Industry and Trade Vu Huy Hoang said on Tuesday in a television broadcast. Vietnam's shipments dropped about 20% to 1.2 million tonnes in the first quarter.

The National Anti-Corruption Commission is investigating allegations that caretaker Prime Minister Yingluck Shinawatra was negligent for failing to stem losses from the programme. Ms Yingluck has defended the policy, a centrepiece of her administration, and is contesting the allegations.

''If the government continues selling at low rates like this, that will help the country regain its position as the top exporter,'' said Mr Chookiat. ''At this low price, buyers who buy from India and Vietnam will switch to Thailand.''