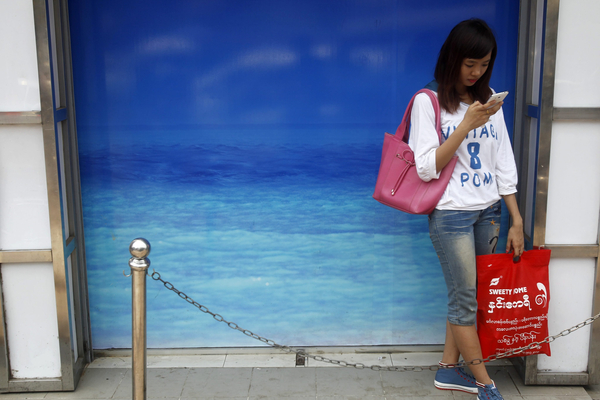 A Myanmar woman used her mobile phone at a roadside in Yangon on Friday. Norway and Qatar are poised to play pivotal roles in Myanmar's economic development. (EPA photo)

On Jan 30, Norway's Telenor Group and Qatar's Ooredoo Group signed the final licences to build and operate 2G and 3G mobile phone services in the country after they beat 89 other contestants for the 15-year concessions granted in June.

Both firms are majority state-owned in their respective countries.

The bid was generally deemed to have been carried out professionally and transparently.

"I think the president decided that this was going to be a showcase," said Sigve Brekke, the Bangkok-based chief executive of Telenor Asia.

The government organised the competitive bid using the world's best standards, with guidance from the World Bank and Roland Berger Strategy Consultants, a German consultant firm.

Myanmar President Thein Sein, who has been pushing through political and economic reforms since coming to power in March 2011, may have had the 2015 general election in mind with the bid.

"From a political point of view, to provide people with telecommunications is a visible sign that something has changed," said Mr Brekke.

Ooredoo and Telenor are now racing to do just that.

The firm has already sponsored several sporting events including the Ooredoo Cup this month with the Myanmar Football Federation.

Billboards advertising Ooredoo are on display in Yangon and in the countryside, and the company has partnered with the Cherie Blair Foundation for Women to train 30,000 women as mobile retail agents.

Telenor Myanmar, which expects to launch its services by September, has set up an office in Yangon and is in the process of hiring 1,000 staff, but is behind Ooredoo in the publicity campaign.

Some observers suspect Ooredoo may be overcompensating for its Qatar roots in predominately Buddhist Myanmar where anti-Muslim sentiments have been on the rise.

Their suspicions may be justified.

"Speaking honestly, I will not use Ooredoo SIM cards because I don't trust them, and it's my right to use or not to use them," said Pyin Nyar Wara, a Buddhist monk linked to the 969 movement that discourages Buddhists from using Muslim shops.

Working in the favour of both Ooredoo and Telenor will be lingering resentment against the existing government-run mobile services that have monopolised the market for two decades and were both expensive and difficult to obtain.

There are currently fewer than 5 million SIM card holders in Myanmar, a country of 60 million people. In 2010, a SIM card cost about US$500, and permission was required to buy one under previous junta rule.

"Myanmar people have suffered a sense of injustice from the government's telecommunication services for decades," said Than Oo, a retired official at the Communications Ministry.

Both Ooredoo and Telenor plan to offer low cost voice and data services aimed at the rural population such as information for farmers on crop prices and weather, health advice, educational programs and financial services such as bill payments.

Telenor, which started in the Asian market 16 years ago in Bangladesh, acknowledged that Myanmar offers unusual challenges.

The company, which has promised to invest $1 billion in Myanmar and cover 90 per cent of the population within five years, is targeting an average usage per customer per month of around $1.50, small by any standard.

It is confident they can make its money back within three years.

"We can make a profit," Mr Brekke said. "The only way you can make business in a country like Myanmar is you build from scale. We are already making money off this model in Bangladesh, India and Pakistan."

Myanmar's land laws and infrastructure pose the most immediate obstacles.

Unclear title deeds and land disputes are expected to slow the construction of telecom towers. Lack of electricity for those towers, in a country where only 30% of the population are on the grid, is another challenge.

"We know this is going to be harder than what we have ever experienced," Mr Brekke said. "We also know that we are going to have the world looking over our shoulders."