Taking big bikes for a spin

Touring on a big bike not only take riders to many interesting places but also provides a genuine touch of natural beauty and fresh, clean air that can add to the excitement of freedom, agility and comfort on two secure wheels. 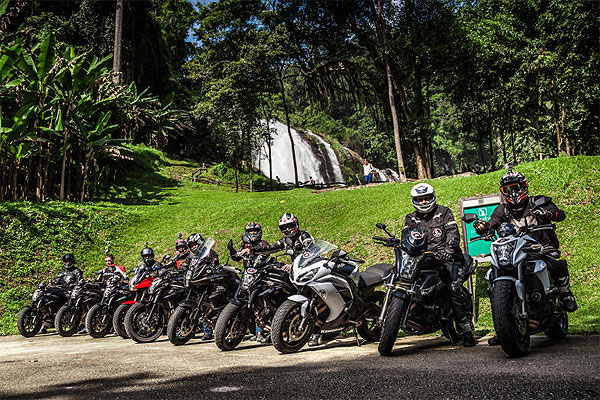 That is the business concept Big Bike Tours (BBT), an operator in Chiang Mai, adopts with its big bike rental service to tourists.

Without any advertising, riding a big bike has been a popular activity for tourists in Chiang Mai for several years. Some girls want to be a pillion rider of luxury motorcycles more than sitting in a supercar, as it is more fun and exciting.

BBT began business as a group of big bike owners riding for fun and then expanded into a big bike tour business. BBT was established in 2009 in Chiang Mai by Kay Kaesler and his brother-in-law Nirin Chaiyapan.

"I had a drink with Kaesler, and he asked me why didn't I set up a tour company. I have been a tour guide for a long time. He proposed creating a website for me. At that time I rode my big bike as a hobby, so I wanted to combine it with my tour business," said Mr Nirin.

That was the start of BBT. It provides big bikes and touring services. Shortly after the website was launched, a foreigner made a reservation. He was very happy and told his friends to try it if they visited Chiang Mai.

Since then, big bike tours have become popular via word of mouth, the internet and online marketing campaigns.

Both Mr Kaesler and Mr Nirin have more than 15 years' riding experience, especially in northern Thailand. Their riding programmes are booked about 100 days a year.

Apart from ranking No.53 among 256 activities in Chiang Mai, BBT also has 2,562 likes on Facebook. Its main customers are from Australia, Europe and Taiwan. India is a rising star market now.

It offers 10-, eight-, six-, five-, three- and one-day package tours. There are many popular routes such as Chiang Mai-Pattaya, Unseen Thailand, Amazing Thailand and the Golden Triangle. Some package tours in the 10-day riding tour include the Thailand-Laos route, a 2,206-kilometre ride starting from Chiang Mai running through Nan to Xayaboury and Luang Prabang in Laos; and the Vang Vieng-Vietnam-Chiang Khan-Khao Kho-Uttradit-Chiang Mai route. The price is 110,000 baht for rider and 60,500 baht for pillion.

A tour package comes with a motorbike, vehicle service, riding gear, all fuel, oil, an English-speaking professional tour guide licenced by the Tourism Authority of Thailand (TAT), a single room for each rider, all entrance fees, airport transfers, three meals a day, soft drinks, accident insurance up to 100,000 baht and life insurance up to 1 million baht.

The company said every tour programme has been researched to show its clients the best riding and cultural experiences of Thailand. It limits a motorcycle tour group to 10 riders since a small group is safer and friendlier.

The TAT is interested in big bike travelling services. It has found that more working people would like to join the riding tour.

Big bike riders neither stay at luxury hotels nor have expensive meals but focus mostly on social and community contribution activities. For example, they travel to donate sporting goods and build toilets in remote areas, said Eumporn Jiragalwisul, the TAT's southern director.

At present, there are big bike clubs in most provinces in the South. The size of their touring group ranges from a handful to some 1,000 bikes. They travel to learn about rural lifestyles, not just for sightseeing. The average length of a trip is 4-5 days.