The energy giant PTT Plc has been reluctant to invest in the retail oil business in Myanmar as part of its aggressive expansion plan in Southeast Asia, citing unclear regulations in the previously military-ruled country. 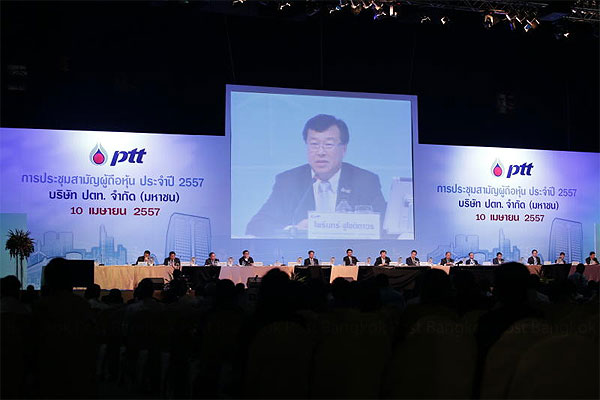 Senior executive vice-president Auttapol Rerkpiboon said investments in Myanmar remained risky and PTT has been awaiting a clear investment policy to be announced by the Myanmar Investment Commission.

Once Myanmar opens this sector, PTT plans to allocate about 1.3 billion baht to open 50 petrol stations there. It now has only one station in Nay Pyi Taw and an oil depot in Yangon.

Buranin Rattanasombat, vice-president for the international market, said PTT plans to invest 3 billion baht to expand retail oil business in Asean from this year to 2018.

The company expects sales volume in the three countries to grow by 10-15% each year from 1.6 billion litres last year with a value of 60 billion baht.

"Our service has received a good response in these countries. We are confident in the growth opportunity even though the business is highly competitive in the Philippines," said Mr Buranin.

PTT and its subsidiaries have set a five-year capital expenditure plan of 1 trillion baht through 2018. Half will be used for petroleum exploration and production, 17% for oil refining and petrochemicals, 14% for the gas business, 12% for new business and asset acquisition, 6% for oil and international trading and 1% for research and development.

The parent company alone will spend 86.9 billion baht this year on the oil and gas business.

Senior executive vice-president Saran Rangkasiri said fuel consumption in the first quarter was flat year-on-year due to the economic slowdown and political unrest.

Normally, the first quarter is the peak season for oil consumption, with tourism and economic activities pushing a growth rate of 2-3%.

For the whole year, oil consumption should be on a par with the level last year, Mr Saran said.

Shares of PTT closed yesterday on the SET at 307 baht, up three baht, in trade worth 625 million baht.