From cool waste to beautiful blooms with help from LNG
Tech

From cool waste to beautiful blooms with help from LNG 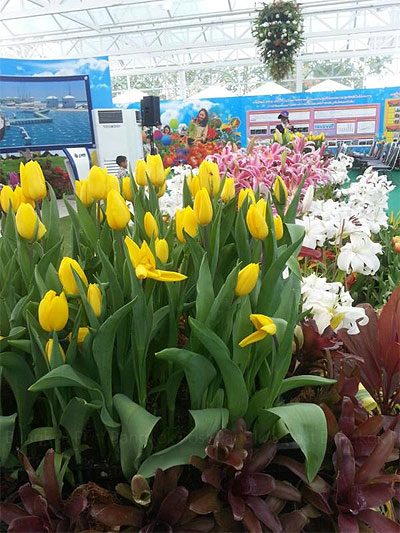 PTT exhibits tulips and other cool-season crops grown using cool waste from the regasification process at its LNG receiving terminal in Rayong. The one-week event earlier this month attracted over 10,000 visitors.

The research, conducted with Chiang Mai University, the Office of the Royal Project Board and King Mongkut University of Technology Thon Buri, found that tulips and lilies are the most appropriate cool-season crops using this method.

Chawalit Boonbumrungchai, PTT’s manager of turnaround management, said Thailand is the first tropical country to use cool waste from LNG, as most users of the gas are in cooler areas such as Japan, South Korea and Europe.

“Similar to England, these countries could shift cool waste into warm air, but we chose cool air for agri-business because a number of Thai businesses are involved in this field,” he said.

Lilies and tulips grown by PTT have been sold to local flower shops in Rayong. From April 3-9, PTT exhibited the results of its cool waste management project to the public near Map Ta Phut to raise public awareness of the system.

“This took a series of trial and error for many years before we knew how to grow flowers and strawberries,” said Mr Chawalit, adding the experiment would be expanded to year-round production.

PTT and its partners are ready to offer technical support for growing cool-season crops such as flowers and strawberries as part of its corporate social responsibility programme.

Mr Sirichai said the next research step is to produce a mobile cool energy storage unit, which is similar to a smartphone power bank but is used for cooling.

“We are developing a smaller, longer-lasting cool power bank and expect the first prototype to be finished within this year,” said Mr Chawalit.

Researchers are close to finding an appropriate phase change material or cool vehicle material, he said. A patent for cool storage management will also be registered.

Shares of PTT closed Friday on the Stock Exchange of Thailand at 311 baht, down one baht, in trade worth 501 million baht.