Local companies' concerns over being placed at a disadvantage are an important factor stalling Thailand's efforts to battle corruption, says the National Anti-Corruption Commission (NACC). 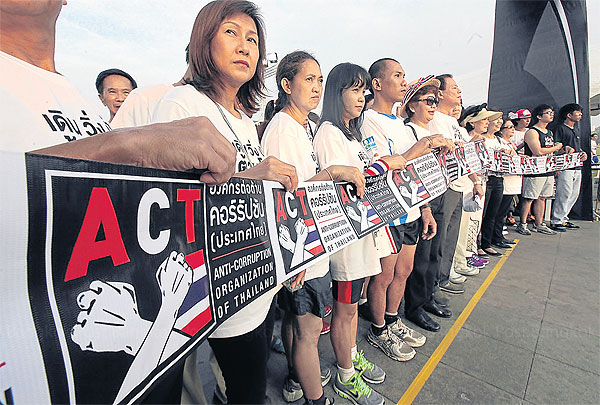 The Anti- Corruption Organisation of Thailand organises frequent activities such as this ‘Run against Corruption’ event aimed at raising awareness among the public about battling corruption. At present, 47 companies and associations are ACT members. (Photo by Thiti Wannamontha)

Thailand plans to make bribery of foreign public officials a criminal offence as a part of its anti-corruption strategy, but a preliminary NACC-funded study shows local firms believe this would affect them negatively.

The study, carried out by Chulalongkorn University’s law faculty, said Thailand remained unprepared to adopt an international agreement by the Organisation for Economic Cooperation and Development (OECD) that would criminalise the bribing of foreign public officials.

"Listed companies have widely embraced the best practice of corporate governance, but non-listed ones and small and medium-sized enterprises, which have lower corporate governance standards, are not ready for Thailand to join the OECD convention," said the report.

The OECD Convention on Combating Bribery of Foreign Public Officials in International Business Transactions, which took effect in 1999, is similar to the US Foreign Corrupt Practices Act of 1977, which deems US companies bribing foreign public officials for business purposes a criminal offence.

If Thailand adopts the OECD, Thai companies will be penalised for bribing foreign officials.

"Many companies we interviewed said it would place them at a disadvantage since their competitors were not part of the convention," said Prof Sirilaksana Khoman, the NACC’s chairwoman for the prevention of economic sector corruption. "We'd like the private sector at least to consider it and study the pros and cons."

For Prof Sirilaksana, being part of the international agreement could foster an anti-corruption culture.

Thailand already has some laws in place that meet the convention, such as the Extradition Act and deployment of territorial and national jurisdictions, but it must enact new laws specifically making bribery of foreign public officials a criminal offence and prescribe penalties and a standard of liability for legal persons.

This would also make it easier for Thailand to file charges against foreign companies that have bribed Thai officials. The evidence could then be used to file corruption charges against Thai government officials or politicians. For example, fire trucks and boats listed under a purchase agreement signed by the late Bangkok governor Samak Sundaravej in 2004 were found to be overpriced.

Later the Supreme Court's Criminal Division for Holders of Political Office found both Pracha Maleenont and former senior Bangkok Metropiltan Administration official Athilak Tanchookiat guilty of rigging bids in the deal, which favoured an Austrian supplier by allowing the contract to be signed without comparing prices.

"When we investigated that case, we wanted to file charges against the company involved in the bribery, but at that time Thailand was not a member of any international convention, so the foreign company failed to answer the charges," Prof Sirilaksana said.

Back then, Thailand was a member of the UN Convention against Corruption but did not ratify it until 2011 under the Abhisit Vejjajiva government. That convention requires governments to implement measures aimed at preventing corruption, although the OECD convention imposes higher obligations in some areas.