Buddhist temples and dragon fruit: A trip down the Mekong
Business

Buddhist temples and dragon fruit: A trip down the Mekong

PHNOM PENH - The sun warms the skin and the wind cools it as the boat's engine hums. We are riding down the Mekong, the drinks in the cooler are ice cold and children are waving from the banks of the river.

The Royal Palace in the Cambodian capital Phnom Penh is the magnificent backdrop for the start of a trip down to the Mekong Delta and Vietnam's Ho-Chi-Minh-City, formerly Saigon.

The spectacular cruise takes in villages, temples and markets and can be enjoyed by the budget traveller as well as the well-heeled.

Up top is the sun deck for fresh air and a good view. Below, the luggage and backpacks are stacked. 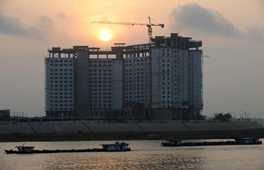 The sun rises over a hotel building under construction in Phnom Penh on March 28, 2014. (AFP photo)

Nights are spent ashore in hotels with air conditioning, showers and television. There is also a home stay option, the opportunity to spend the night with a Vietnamese family on one of the islands in the delta.

Numerous companies in Cambodia and Vietnam offer the four-day trip by boat and bus for around 60 to 70 euros (83 to 97 United States dollars).

That includes accommodation for three nights as well as entry and excursion fees. It's also possible to take the boat-only tour, which takes two or three days. The trips are available in both directions.

After three hours or so the boat pulls in at a small jetty. Here Vietnam begins. The border guards are friendly. There is a change of boat and now a red flag with a yellow star flies from the bow.

In the border town of Chau Doc, the apartments, filling stations, hotels, and fruit and vegetable markets float over the river. Beer and fresh pineapple- and papaya-shakes can be had for little over a dollar.

In the nearby Victoria Hotel, meat and fish are sizzling on a charcoal grill. A large portion costs the equivalent of 5 euros. Thousands of families practice fish farming in the delta, growing fish and shrimp in wire baskets and containers under their houses.

Chau Doc is a byword for religious diversity: it has Buddhist pagodas and Cao-Dai temples and a mosque for the Cham, a Muslim minority.

The region is the rice, vegetable and fruit producing heartland of Vietnam. The colourful market in the city of My Tho shows what the delta with its rice fields, mangrove forests, islands, nature reserves and beaches has to offer.

The final part of the journey is by bus. It is 8pm and the lights of Ho-Chi-Minh-City sparkle. The terminus is De Tham Street, a central location offering plenty of hotels, restaurants and tour operators. From here, the metropolis is easy to explore.