Tesco Lotus has opened its first regional distribution centre in Khon Kaen province to support business growth and serve customers in the Northeast. 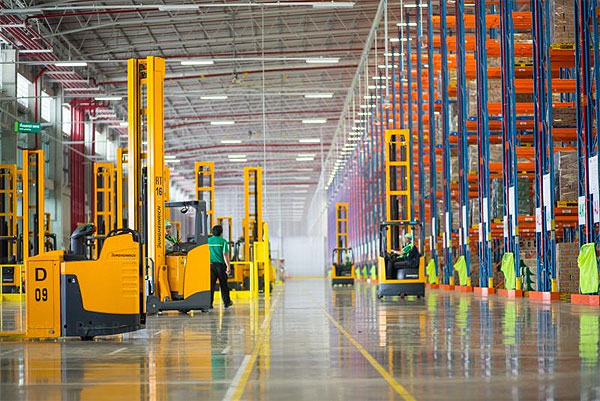 With a service area of 52,000 square metres, the structure is one of the country's biggest distribution centres.

"We have invested 2.5 billion baht in building this state-of-the-art distribution centre, and the project has already created nearly 1,000 new jobs in the local area," he said.

The distribution centre will serve more than 300 Tesco Lotus stores of all formats in the northeastern region, from the smallest Express marts to the biggest Extra stores.

The facility handles about 1 million cases of products a week, with the capacity to handle up to 3 million.

"The focus of the regional distribution centre has been to get products closer to customers, and improving availability of products on shelves," Mr Christie said. "By setting it up in Khon Kaen, we have also reduced trucks travelling 400,000 kilometres every week, a major reduction in carbon emissions."

The centre has been designed to similar standards as top warehouses in Britain and Europe, using the latest innovations and distribution technology. It was built under an eco-friendly concept with a wide range of energy-saving equipment.

Tesco Lotus has four other distribution centres, all in the Central region, servicing nearly 1,700 stores in Thailand.

Ten SMEs, startups likely to tap into LiVEx this year

Ten small and medium-sized enterprises (SMEs) and startups are expected to list and raise funds through LiVE Exchange (LiVEx) this year, according to Prapan Charoenprawatt, executive vice-president of the Stock Exchange of Thailand (SET) and president of LiVEx.