More than 30,000 subcontracted workers laid off this year

Thailand's auto sector, Southeast Asia's biggest, has fired more than 30,000 subcontracted workers this year and slashed production, as sales plunge after months of political unrest that threatens to drive some manufacturers offshore.

The lay-offs are the latest sign that the auto industry, accounting for about 11% of Thai economic output, is being hit hard by the prolonged power-struggle between the Bangkok-based royalist establishment and the mainly rural supporters of ousted former Prime Minister Thaksin Shinawatra.

As a regional production and export base, Thailand's troubles have major implications for top manufacturers such as Toyota Motor Corp, Nissan Motor Co and Ford Motor Co, which may be forced to shift some production to cheaper bases such as Indonesia, the region's second-biggest auto market.

"As political instability continues, we are concerned that automakers may reduce their exposure to Thailand to diversify their risk," said Kovit Wongkolkitsilp, chairman of the auto parts group of the Federation of Thai Industries (FTI). 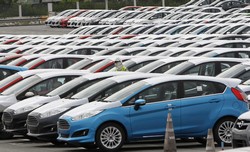 An employee walks among vehicles at AutoAlliance Thailand, a Ford and Mazda joint venture plant, located in Rayong province, on Sept 17. (Reuters photo)

Honda Motor Co said it was considering delaying the start-up of a new $530-million manufacturing plant in Thailand by six months to a year, as the economy teeters on the brink of recession and political turmoil prompts automakers to rethink their investments.

"It's critical, especially in the auto sector. We have seen a big lot of layoffs, about 500 to 700 staff, several times in recent months," National Congress of Thai Labour President Panus Thailuan said.

Toru Hasegawa, Nissan's Indonesia chief, said that "because of the political uncertainty, total industry volume is a bit affected", but he added that Thailand remained a key market for the company.

"They are also a big market and still growing. For Nissan, Southeast Asia is very much important," Mr Hasegawa said.

Rival Toyota said at the start of the year it planned to sell 400,000 vehicles in Thailand this year, but in the three months to March saw sales there drop 33% to 84,000.

Toyota Executive vice-president Nobuyori Kodaira told reporters in Tokyo on Thursday that the car maker might have to consider cutting its sales outlook for Thailand as a result.

"Thailand is one of our very important strongholds globally and we have no change in our stance to make vehicles and conduct business there," he said.

The roughly 30,000 mostly low-skilled sub-contractors who Mr Panus said had been laid off this year represent about 3% of the auto sector's workforce.

The layoffs reflect a year of sliding domestic sales that has sucked the life out of an auto industry that relies on local buyers to consume about half of its output.

The expiry last year of a first-car subsidy scheme, which had sparked a surge in demand in 2012, has exacerbated the downturn in the domestic market, analysts said.

"Auto-parts makers' production has dropped by 30% to 35% so far this year. They are suffering from the impact of poor domestic demand and fierce competition from rivals in the export market," the FTI's Kovit said.

Domestic auto sales in March this year plummeted 46.7% compared with a year earlier, according to the FTI. March output slumped 29% on year, while car makers focused more on export markets. Auto exports rose 9% on year to the highest in six months.

Companies that depend on domestic sales rather than exports say the industry should bottom out in the first half, amid signs that output and sales turned a corner in March compared with the previous month.

Automakers are planning to launch new models to stoke demand in the second half, hoping the election will go ahead in July and the formation of a new government will resolve the political deadlock.

"We may see the light at the end of the tunnel. If the new election is held in July, we should have a new government in the third quarter. The sooner the better so we can recover," Mr Kovit said.