‘The first generation builds the business, the second makes it a success, and the third wrecks it,” goes an old Chinese saying. 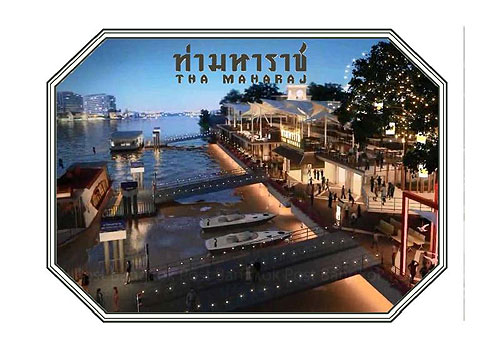 An artist’s rendering of Tha Maharaj, the lifestyle mall project on Rattanakosin Island, which is due to be launched later this year.

The proverb, however, does not apply in the case of Natapree Pichaironarongsongkram. For her, the third generation of Chao Phraya Express Boat (CPEX) — the express boat service operator with a concession to provide river transport services since 1971 — a new horizon to expand the family business has just sprung up.

Natapree, 28, graduated from Cornell University with a bachelor’s in hotel administration then gained a master’s in real estate development from Columbia University. She vows to expand the family’s business empire into the retail, rental, condominium and apartment markets on top of its express and ferry boat services and hospitality business through Supatra Real Estate, which was established late last year with registered capital of 50 million baht. The new retail and property ventures will be developed largely on the land bank the family has acquired over the years.

Established by Khunying Supatra Singhulaka, Ms Natapree’s grandmother, Chao Phraya Express Boat’s operation runs between Nonthaburi and Ratburana, a distance of 21 kilometres. With a fleet of 65 boats covering 38 piers, the company’s services carry 35,000 to 40,000 passengers each day, or 13.5 million passengers a year. 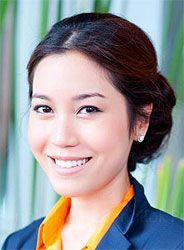 “We have a number of projects in the pipeline,” said Ms Natapree, also managing director of Supatra Real Estate. “But the first highlight will be the 550-million baht Tha Maharaj community mall by the Chao Phraya.”

Created by Contour design company, the lifestyle mall on a three-rai plot of land will become a new hangout on Rattanakosin Island.

The Tha Maharaj project will feature 43 restaurants and shops, some from famous chains and some unique ones, plus 14 kiosks. Its parking space will be able to accommodate 200 vehicles. With ample green areas, the new community mall promises to look bright, pleasant and refreshing in its riverside setting.

The project is more than 60% complete. Its space should be ready for tenants to start decorating their shops from June onward, with the mall scheduled to be launched in the last quarter of the year.

“Tha Maharaj is accessible by both road and river. The project has direct links to three piers — Tha Phrachan Tai, Tha Mahathat and Tha ‘Tourist Boat’ for blue-flag and Chao Phraya Express boats. This is in addition to an exclusive pier for restaurant boats and river-cruise ships,” said Ms Natapree.

“With such facilities, Tha Maharaj is going to be an interchange for water and land transportation systems of Rattanakosin Island. The project also boasts proximity to Thammasat and Silpakorn universities, several government agencies and key tourist attractions such as the Grand Palace, the Emerald Buddha Temple and the National Museum.”

“Today, chic eateries are popular because people are looking for a place where they can hang out with friends in a nice setting. If the place is charming, comfortable and riverside, it is bound to offer a very warm welcome. Great places by the Chao Phraya always rank among the most popular venues. Tha Maharaj, therefore, has many strong selling points. It is on the banks of the Chao Phraya. It has direct access to the river transportation system. Tha Maharaj moreover boasts colonial fusion architecture that accentuates the appeal of the neighbourhood and blends well with its rich history.”

According to Ms Natapree, 30% of the project’s leasable spaces are already taken. The company is also in the process of negotiating or preparing lease contracts with many interested tenants for another 30% of spaces. It believes more than 90% of shops will be ready for the grand opening in the last quarter of the year.

The company expects the project to break even within nine years.

On top of Tha Maharaj, Supatra Real Estate has invested about 50 million baht to develop a 4,000-square-metre plot opposite Tha Wang Lang pier into retail market for rental and is building a condominium project on a five-rai plot at Sena Nikhom.

The retail market project will become operational by the third quarter next year, while the condominium project is pending an Environmental Impact Assessment study.

“We see Bangkok’s long-term real estate business is promising,” said Ms Natapree. “The reputation which our family has established over 40 years has helped a lot to secure confidence and trust from potential tenants and buyers.”