The business community wants the forthcoming interim government to immediately address pressing issues that have plunged the Thai economy into recession and spurred idle talk of becoming the region’s ‘‘sick man’’. The Bangkok Post surveyed business leaders across key sectors to find out what they see as the top priorities to tackle right away. High on the agenda is for the next administration to resolve the notorious rice-pledging scheme, deal with widespread corruption, call a general election, end populist policies and carry out across-the-board reforms of political, social and economic structures. 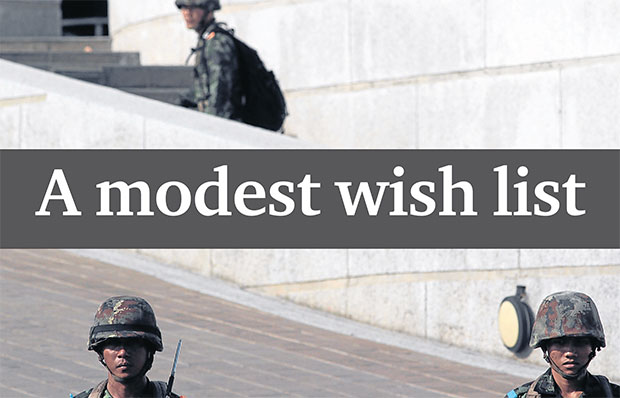 Once the soldiers are dismissed and a functioning government put in place, the heavy lifting must begin. Chanat Katanyu

Why? The former government led by Yingluck Shinawatra was months behind with payments to rice farmers. Its caretaker status limited it from borrowing to pay off growers who pledged paddy for the 2013-14 main crop under the contentious rice-pledging scheme.

2. Clamp down on corruption

Why? Thailand’s ranking in a global corruption survey in 2013 sank to 102nd from 88th the previous year, with a transparency score of 35 out of 100. Transparency International’s latest Corruption Perceptions Index surveyed 177 countries around the world.

Why? A country under a junta looks bad from an international perspective and hinders attempts to restore the confidence of foreign investors. Many businesses will be able to resume normal operations when a functioning government is in office, says Supant Mongkolsuthree, chairman of the Federation of Thai Industries.

Why? Thailand’s domestic demand is dented by populist policies, a key cause of distortion in the Thai economy. For example, auto demand fell by 50% immediately after the first-time car buying scheme expired and the auto market is still mired in a downward trend, says Bangkok Bank executive chairman Kosit Panpiemras.

Why? Speeding up the fiscal 2015 budget approval process will help avoid stalling of public expenditure and investment, says Paiboon Nalinthrangkurn, chairman of the Federation of Thai Capital Market Organizations.

Why? Investment in approved infrastructure projects such as dual-track railways, road extensions to neighbouring countries, deep-sea ports and urban mass transit should help spur the economy. When the government starts investing, the private sector follows in its footsteps and boosts total investment.

Why? The absence of a functioning government since last October delayed the formation of a new executive board for the Board of Investment (BoI), normally chaired by the prime minister. The stalled approval process could eventually hurt the confidence of investors in the long run, translating into huge damage for a country that still relies heavily on foreign direct investment.

Why? Small and medium-sized enterprises, now critically ill, require a shot in the arm in the form of cash injections and state supports.

Why? Addressing income disparity across the societal spectrum through a proper and sustainable development model would boost income and productivity among low-income earners, going a long way towards spurring economic growth, says Vichai Assarasakorn, vice-chairman of the Thai Chamber of Commerce.