Leading analysts call for rail and road projects and Dawei development, but a rethink on high-speed rail and water management plans.

Scaling back, redefining and reviewing are the words analysts used to describe whether megaprojects spearheaded by the Yingluck Shinawatra government should see the light of day. 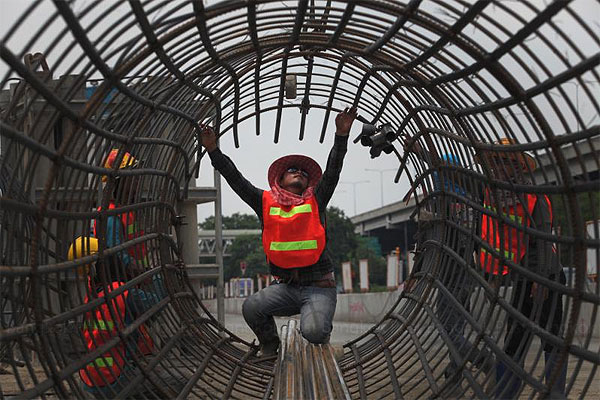 Labourers work on the mass-transit Red Line, which will run from Bang Sue to Rangsit. The NCPO has placed priority on infrastructure projects such as a dual-track railway and elevated trains. Thiti Wannamontha

Authorities on infrastructure were polled by the Bangkok Post and they do not think the schemes should continue without further scrutiny and alterations by the junta because of their far-reaching implications on the Thai economy.

The viability of the high-speed train project, valued at 783 billion baht, was seriously doubted, while the 350-billion-baht water management plan needs to wait, said analysts.

Thailand’s participation in the ambitious Dawei project, the US$50-billion integrated industrial zone in southern Myanmar, should be redefined, they added. 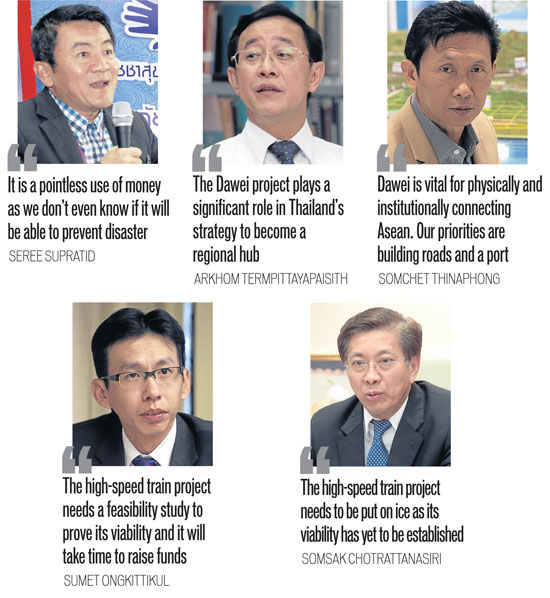 - Suggestion: The dual-track railways and four-lane road expansion should proceed, but the high-speed train project should be shelved.

- Rationale: The investment will help the country shift its transportation focus from roads to the more cost-efficient rail, reducing the percentage of logistics costs to GDP by two percentage points.

The ratio of Thailand’s rail freight transportation will be raised to at least 5% of total transport modes from 2.5%, and its average speed will ramp up to 60 km/h from 39 km/h.

The share of water transport will rise to at least 19% from 15% now.

- Suggestion: Various skytrain projects and dual-track railway projects that were approved by the previous government should proceed.

- Suggestion: The whole project needs to stop pending pragmatic consideration of its merit on a micro basis.

The next government should spend two years engaging feasibility studies of this project as the plan was not thoroughly investigated by the former government.

- Background: This huge scheme came into existence following Thailand’s floods in 2011, which the World Bank estimated cost the country up to 1.44 trillion baht in losses.

Also included in the project are modules for reservoir construction in 17 river basins, land utilisation and town planning, waterway improvements, and data management and warning systems.

Most of the modules are scheduled for public hearings by order of the Administrative Court.

- Suggestion: Thailand’s participation in this development should continue with more defined terms to encourage the Thai private sector’s involvement.

- Background: Dawei is a grand scheme to turn the Myanmar backwater into an massive economic zone with a port, road and rail links, power plants, waterworks, industrial estates, a telecommunications network and a township.

- Rationale: Dawei is vital for connectivity within Asean and to elevate the
kingdom to be the focal point of Southeast Asia.

- Suggestion: There should be greater transparency on what sort of investment models should be adopted for Dawei, e.g. build-operate-transfer.